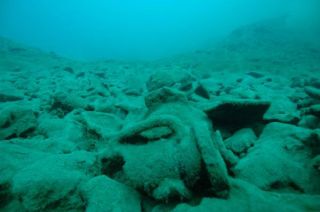 An archaeological team found the very first traces of an Illyrian trading post that is more than 2,000 years old, including more than 30 boats.
(Image: © University of Mostar)

At this time of the year, the pressure to shop, buy and wrap is overwhelming. And so we drag ourselves to the mall, a hopefully one-stop shopping place where any number of stores can accommodate any holiday shopping list. Checking that twice, we schlep up and down until our bags are full and our minds are empty. And every year, it seems like the list grows longer, the schlep more tedious, and the time deciding on gifts endless. Eventually we sit down, have a holiday drink and thank our lucky stars for the mall, because without this modern market place, we'd be also be driving all over town and screaming. And it seems that we have been thankful for the mall for a very long time. Archaeologists from the Museum of Cultural History at the University of Oslo, Norway, recently announced the discovery on the border between Croatia and Bosnia-Herzegovina of a what they speculate is a 2,000-year-old trading post. This ancient market place belonged to tribal people called Illyrians who hunted, gathered and grew some crops. They were also subjected to repeated attacks by every kind of wild hoard or advanced civilization, and they spent a lot of time fighting among themselves as well. Previously, archaeologists thought of them only as fierce fighters and scary pirates, but it looks like they were also peaceful tradesmen. The archaeologists found evidence of walls at what was the water's edge at that time, and a band of mooring holes suggesting boats pulled right up to unload and offload goods. And what they were unloading was wine. In the wreckage of more than 30 Illyrian boats in the former harbor were the smashed remains of Roman wine pitchers, and their corresponding 700 lids. One of the great powers, the Romans, kept showing up and trying to conquer the Illyrians, but sometimes all the Romans wanted to do was shop. But the archaeologists are unclear why the ships were sunk and the wine pitchers in shards. The answer yet to be considered is that the Illyrians, shop keepers by day, might have been party animals when they pulled in their awnings. After trading Romans wine for goods such as salt, the Illyrians probably drank their profits, went for a sail, smashed the clay wine bottles, and ended up sinking their own ships in drunken tomfoolery. The preserved lids are, of course, still a mystery. Why break the wine pitchers but not the lids?

One can only imagine the buzzed Illyrians doffing them as party hats or tossing the lids from ship to ship in some ancient game of Frisbee. We know this all to be a real possibility, because the same kind of post-holiday behavior used to be echoed by modern shopkeepers in our culture before the economy took a nose dive into the current ooze.

Meredith F. Small is an anthropologist at Cornell University. She is also the author of "Our Babies, Ourselves; How Biology and Culture Shape the Way We Parent" (link) and "The Culture of Our Discontent; Beyond the Medical Model of Mental Illness" (link). Her Human Nature column appears Fridays on LiveScience.