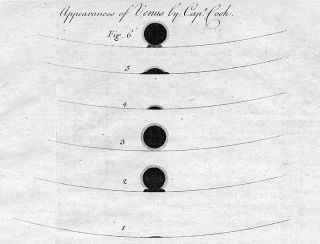 Captain James Cook made these sketches of the transit of Venus as it appeared on June 3, 1769, from Tahiti.
(Image: © Museum of the History of Science, Oxford)

Nearly 250 years ago, when the planet Venus made a rare pass between Earth and the sun, James Cook, the intrepid British explorer, sketched the celestial scene from the island of Tahiti in the South Pacific. Now, skywatchers around the world have the chance to witness the same historic event today (June 5), as Venus again wanders across the face of our nearest star.

During his first voyage around the world, Cook drew the various stages of the transit of Venus as it appeared from Tahiti on June 3, 1769. The explorer was joined by astronomer Charles Green on the expedition, and the crew of the HMS Endeavour observed the transit using special equipment from a spot that later took the name "Point Venus," according to NASA officials.

Witnessing the Venus transit was one of the primary purposes of the journey, since the celestial encounter would help astronomers piece together key clues about the size of the solar system, NASA officials explained. The crew made a variety of measurements during the event, and both Cook and Green sketched what they saw.

The drawings were originally published in 1771 as part of "Observations Made, by Appointment of the Royal Society, at King George's Island in the South Sea; By Mr. Charles Green, Formerly Assistant at the Royal Observatory at Greenwich, and Lieut. James Cook, of His Majesty's Ship the Endeavour," in the journal Philosophical Transactions.

Transits of Venus are some of the rarest planetary alignments and skywatching sights, because they only occur in pairs eight years apart, once every 100 years or so. In fact, Venus has only crossed in front of the sun seven times since the invention of the telescope. [Venus Transit of 2004: 51 Amazing Photos]

Today's transit is paired with a previous one that happened on June 8, 2004. After today, however, the next pair of Venus transits will not occur again until the years 2117 and 2125.

As Venus crosses the solar disk, it will appear as a small, black blemish on the face of the sun. The transit will begin when Venus first touches the outer edge of the sun, at around 6:03 p.m. EDT (3:03 p.m. PDT; 2203 GMT). The entire event will last roughly seven hours.

Much of the world will be able to see the transit of Venus, and at least one group of scientists are mimicking the historic 18th-century expeditions by watching the event unfold from different reaches of the planet.

Members of the Venus Twilight Experimentare equipped with solar telescopes in Arizona, Australia, California, Hawaii, India, Japan, Kazakhstan, the Arctic and the South Pacific to watch as Venus crosses the sun.

Several satellites in orbit will also be monitoring the event and collecting data on the sun and the atmosphere of Venus.

NASA astronaut Don Pettit, who is currently living and working aboard the International Space Station, is aiming to be the first person to photograph the Venus transit from space. Pettit, who is partway through a months-long stay at the orbiting outpost, will take pictures of the scene from the station's seven-windowed Cupola observatory.

WARNING: If you plan to observe the transit of Venus in person, it is very important to exercise caution and protect your eyes. It is very dangerous to stare directly at the sun. Special eclipse glasses or solar filters for telescopes are needed to avoid permanently damaging your eyes.