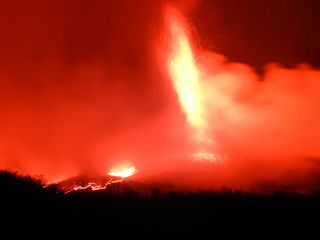 Mount Etna at the height of its latest magnificent display, on April 1.
(Image: © Boris Behncke.)

Sicily's Mount Etna unleashed the latest in a year-long series of fiery shows this last weekend. It was the Italian peak's 23rd such display since January 2011, according to a scientist who faithfully documents the peak's regular paroxysms.

The volcano's latest episode, which reached its peak in the wee hours Sunday (April 1), lit up the night, spouting molten rock many hundreds of feet into the air for about an hour and a half.

"In many respects, [this event] was a repetition of all the earlier ones. Note that in recent years, this is Etna's most typical kind of activity," Boris Behncke, a volcanologist with Italy's National Institute of Geophysics and Volcanology, told OurAmazingPlanet in an email.

As chance would have it, the mountain's latest display fell on the same day (April 1, get it?) that British billionaire and explorer Richard Branson announced plans to pilot a vehicle deep into Mount Etna's molten lava to explore the volcano's insides. In a tweet about his April Fools' prank, Branson announced he'd take actor Tom Hanks and other Hollywood luminaries with him.

Mount Etna is one of the most active volcanoes on Earth. Between January and August 2000, the mountain experienced 66 of these episodes of "lava fountaining," and a total of 250 since 1995.

Behncke, who is also an accomplished photographer, said the fireworks ended just before dawn.

He took the photographs from 7 to 9 miles (12 to 15 kilometers) away from the restive mountain, "which is a totally safe distance even in the areas affected by the fallout," Behncke said.

During these episodes, Mount Etna sends out huge plumes of ash and pelts the surrounding areas with scoriae — porous, very light fragments of basaltic rock that Behncke said are typically about an inch (3 centimeters) in diameter.

Behncke, who lives nearby, has a front row seat to these astonishing displays. "It's what I call 'The Greatest Show on Earth,'" Behncke said. "It's unbelievably spectacular."