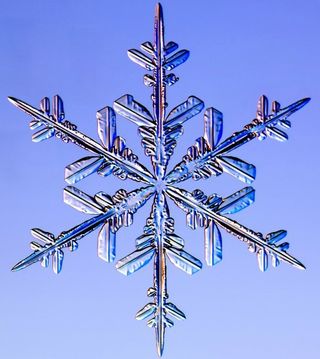 A California physicist uses a keen eye for beauty and technical know-how to reveal the astounding beauty of snowflakes.
(Image: © Kenneth G. Libbrecht.)

Skiers in the Rocky Mountains may be rejoicing over the record-breaking snows this week — on Monday (Feb. 20), a resort in Steamboat Springs, Colo. received 27 inches (70 centimeters) of snow in 24 hours — yet for much of the United States, snow has been nowhere in sight.

Winter has been decidedly wimpy across much the contiguous 48 states; unusually warm winter temperatures have been parked over much of the country, and, not surprisingly, there's also been very little snow.

(There are some exceptions. This winter, record-breaking snows socked Alaska, and at least one Texas city.)

With the snowman population suffering and snowball fights near an all-time low, many U.S. residents may be longing for a taste of the white stuff. What's a snow-lover to do?

Feast your eyes on the work of Kenneth Libbrecht, a professor of physics at Caltech, who has been capturing the glory of snow on film for more than a decade. But don't expect images of snow-capped mountains.

Libbrecht trains his specialized camera on individual snow crystals, revealing a world of astonishing beauty and symmetry in a mere drop of water. [See more images of his snow crystals here.]

Although Libbrecht has amassed more than 10,000 photographs over the years, he must be selective with his subjects. Photogenic snow crystals are the exception, not the rule, he said.

"The large symmetrical crystals are maybe one in a million," Libbrecht told OurAmazingPlanet in an email.

To find his subjects, he sets out a large piece of cardboard during a snowfall, ideally when the temperature hovers around 5 degrees Fahrenheit (minus 15 degrees Celsius). On his snow crystals website, Libbrecht writes that blue foam core works well.

Even with the naked eye, he said, it's pretty easy to see if a crystal is a keeper or a dud.

When he's found a beauty, he uses a tiny paintbrush to pick up the snow crystal, places it on a microscope slide, and takes its portrait.

Yet Libbrecht said that expensive equipment isn't necessary to peer at the wondrous complexity of snow crystals.

"A small magnifier costing a couple dollars is all you need," he said. Then just stick out your jacket sleeve and catch some snow.

"Black fleece is good, but not required," he said.