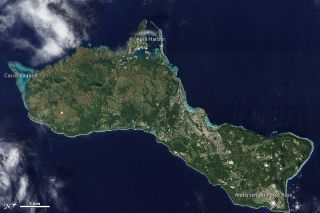 Situated in the tropical Pacific Ocean, the U.S. territory of Guam lies at the end of the Mariana Island archipelago, which shares it's name with the Mariana Trench , the deepest point in Earth's oceans.

As the largest island in that archipelago, Guam stretches roughly 30 miles (50 kilometers) from northeast to southwest. Fields, forests, military bases, and settlements all mix on the landscape and can be seen in this image taken by NASA's Earth Observing-1 (EO-1) satellite on Dec. 30, 2011. Two prominent airstrips run northeast-southwest, one at the northeastern tip of the island, and the other in central Guam.

Coral reefs fringe the island, and they are especially visible around Apra Harbor and Cocos Lagoon. The shallow waters where the corals reside are a brilliant blue color.

But just a couple hundred miles from the island, the ocean gets much deeper. Guam is the closest land mass to the Mariana Trench, which dips down about 6.8 miles (11 kilometers) below sea level — the deepest point on the planet's surface. Only two humans have made the submarine dive into the trench  — in 1950, Lt. Don Walsh of the U.S. Navy and scientist Jacques Piccard descended some 35,797 feet (10,911 meters) down into the Challenger Deep in the trench.