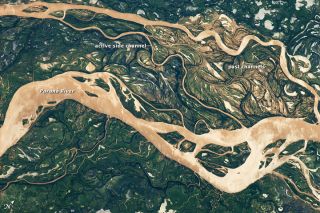 The evolution of plants dramatically reshaped the face of the Earth, from the flow of its rivers to the depths of its glacier-carved valleys, new research suggests.

Before widespread vegetation, rivers in Earth's early landscapes were relatively simple, researchers say in a new study. They had unstable banks with wide, shallow channels and little evidence of muddy floodplains. Plants play a crucial role in breaking down rock and generating mud, which is made of tiny particles resulting from the breakdown of rock.

"It is reasonable to suppose that much less mud was generated by weathering before rooted plants were in existence and able to colonize bedrock areas," said sedimentologist Martin Gibling at Dalhousie University in Halifax, Nova Scotia.

Land plants with root systems began to appear about 415 million years ago, and the way they stabilized the banks of rivers and streams allowed for the development of more complex systems with multiple channels, meandering courses and muddy floodplains. The rise of muddy plains and mud in river channels in turn provided new settings for plant colonization and evolution, the researchers said.

"The scientific community has generally supposed that the rivers we are familiar with at the present day — braided, meandering, anastomosing, multiple branching rivers — have always existed on Earth," Gibling told OurAmazingPlanet. (Anastomosing is the joining of branches.) However, "it has become apparent that, prior to the evolution of rooted plants, meandering and anastomosing rivers virtually didn't exist. Landscapes would have been hugely different and would have functioned in very different ways: wide sandy rivers, weak banks, strong wind activity, sandy deltas, fewer wetlands and no peats."

The widespread expansion of trees about 315 million years ago marked the widespread appearance of narrow fixed channels for the first time, as well as "braided" rivers containing vegetated islands. Over time, the appearance of woody debris led to log jams that promoted the rapid formation of new river channels, an idea supported by lab experiments and studies of modern river systems.

"The colonization of Earth's landscapes by plants was clearly one of the most significant events in Earth history. It is surprising that, until about five years ago, few geoscientists had looked seriously into exactly what happened to landscapes during that period of some 150 million years," Gibling said. "We have been able to show through research over the past five years that the effects on river systems and terrestrial landscapes were profound."

Earth was not the only known home of meandering rivers. "There was water flow on Mars in the past, and at least one meandering river is known, on the Eberswalde Delta, with features similar to some modern rivers on Earth," Gibling said. "What made the tough banks on Mars? Not vegetation — as far as we know! — but likely ice. So plants are not essential for generating meandering rivers, but their roots provide a major means of strengthening the banks."

The effect on rivers is not the only way plants may have influenced the shape of Earth's surface — their effects on glaciers might be another.

Glaciers often behave as giant, relentless bulldozers. Over millennia, these rivers of ice can level mountains and carve deep valleys.

The advent of vascular plants, such as all seed-bearing plants, is widely thought to have caused the drop in atmospheric carbon dioxide between 360 million and 400 million years ago. This apparently set off an era of global cooling and polar glaciations. Carbon dioxide is a greenhouse gas that traps heat from the sun, and reducing atmospheric levels of it would cool the planet, thus potentially triggering this past glaciation.

Now research might link two glaciations between 440 million and 460 million years ago by the advent of the first land plants, nonvascular ones akin to mosses. (Unlike trees, nonvascular plants lack channels to carry around water and nutrients inside them, and use other systems instead.)

"These were the first significant ice ages for over 200 million years," researcher Timothy Lenton, an earth system scientist at the University of Exeter in England, told OurAmazingPlanet. "They were the first glaciations that animals and plants — that is, complex life — on land experienced. It is interesting to discover that they could have been triggered by the first land plants."

Lab experiments have shown that modern mosses can break down rocks and minerals, releasing nutrients. The researchers suggest that 460 million years ago, similar plants weathered rock, generating conditions that attracted carbon dioxide from the atmosphere, reducing it by between half and two-thirds.

These plants would have had to cover only roughly a tenth of the Earth's surface "to have had a large global effect," Lenton said. These glaciations apparently later triggered mass extinctions of plants in the ocean.

"The first plants to colonize the land apparently had a profound impact on the composition of the atmosphere, the climate, and ultimately on other life forms — for example, in the oceans," Lenton said.

The scientists detailed their findings in the February issue of Nature Geoscience.