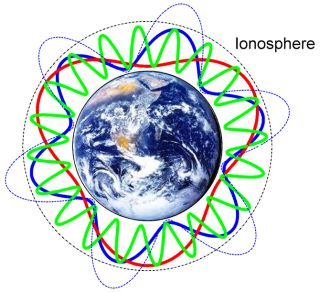 Lightning flashes in the skies above the Earth about 50 times every second, creating a burst of electromagnetic waves that circle around the planet's atmosphere.

Some of these waves combine and increase in strength, creating something akin to an atmospheric heartbeat that scientists can detect from the ground and use to better understand the makeup of the atmosphere and the weather it generates.

For the first time, scientists have detected this heartbeat — called the Schumann resonance — from space. This detection was surprising because the resonance was thought to be confined to a particular region of the atmosphere, between the ground and a layer of Earth's atmosphere called the ionosphere.

"Researchers didn't expect to observe these resonances in space," said Fernando Simoes, a scientist at NASA's Goddard Space Flight Center in Greenbelt, Md. "But it turns out that energy is leaking out and this opens up many other possibilities to study our planet from above." [Video: Leaky Lightning Waves]

Simoes co-authored a study on the detection of this resonance made by the U.S. Air Force's Communications/Navigation Outage Forecast System (C/NOFS) satellite.

Simoes explains the resonance phenomenon like this: Think of a playground swing. If you push the swing just as it hits the top of its arc, you add speed. Push it backwards in the middle of its swing, and you will slow it down.

The waves created by lightning do not look like the up-and-down waves of the ocean, but they still oscillate with regions of greater energy and lesser energy.

These waves remain trapped inside an atmospheric ceiling created by the lower edge of the ionosphere, which is filled with charged particles and begins about 60 miles (96 kilometers) up into the sky.

The resonance of the lightning-generated waves will only happen in a certain sweet spot where the wave is at least (or twice, three times, etc.) as long as the circumference of Earth. This is an extremely low-frequency wave that can be as low as 8 Hertz (Hz) — some one-hundred-thousand-times lower than the lowest-frequency radio waves used to send signals to an AM/FM radio.

As this wave flows around Earth, it hits itself again at the perfect spot such that the crests and troughs are aligned, causing the waves to act in resonance and pump up the original signal.

While they'd been predicted in 1952, Schumann resonances weren't reliably measured until the 1960s. Since then, scientists have discovered that variations in the resonances correspond to changes in the seasons, solar activity, activity in Earth's magnetic environment, in water aerosols in the atmosphere and other Earth-bound phenomena.

"There are hundreds, maybe thousands, of studies on this phenomenon and how it holds clues to understanding Earth's atmosphere," said study co-author and Goddard scientist Rob Pfaff. "But they're all based on ground measurements."

The C/NOFS satellite measured them from altitudes of 250-to-500 miles (400–to-800 km). The team found the resonance showing up in almost every orbit C/NOFS made around Earth, which added up to some 10,000 examples.

While models suggest that the resonances should be trapped under the ionosphere, energy has been known to leak through. The findings meant the models will need to be tweaked to account for the leaky boundary, and also that there is a new tool for understanding the ionosphere as well as the electric events in the atmosphere.

"Combined with ground measurements, it provides us with a better way to study lightning, thunderstorms and the lower atmosphere," Simoes said. "The next step is to figure out how best to use that tool from this new vantage point."