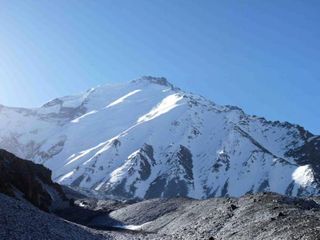 The highest mountain in war-torn Afghanistan was recently reopened to climbers. The event was celebrated in grand fashion with an expedition to the summit.

Mount Noshaq had been closed to the outside world for decades because the region was deemed too dangerous . Located in the Hindu Kush Mountains of the Wakhan Corridor, an isolated panhandle of land connecting Afghanistan with China, Mount Noshaq stands at 24,580 feet (7,492 meters) in height (the world's tallest mountain , Mount Everest, is 29,035 feet (8,850 m)). Due to improved security conditions in the district, Noshaq is now again open for climbing.

"This expedition marks the revival of a once-popular tourist site that was forgotten during the country's political unrest," said Peter Zahler of the Wildlife Conservation Society's Asia Program. "Despite the turmoil that continues in some parts of the country, Wakhan is just one of a number of areas in Afghanistan that are very safe from a security standpoint, and where tourism is already providing jobs and improved livelihoods for local people while providing an incentive to protect the country's fragile environment and wildlife."

Afghanistan was once a major draw for international tourists through the 1970s. The region is home to many species of wildlife, including Marco Polo sheep, urial, ibex and snow leopards.

But after the 1979 Soviet invasion of Afghanistan, mountaineers stopped visiting Noshaq because of the dangerous political climate. The laying of landmines in Noshaq Valley during the country's civil war in the 1990s further isolated the enormous mountain.

In recent months, however, the trail to Noshaq base camp has been repaired and now provides safe passage around the minefields.