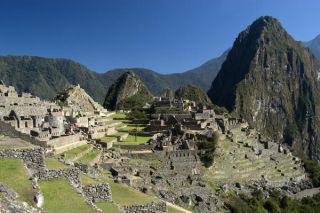 The famed ancient Incan city of Machu Picchu, often called "The Lost City of the Incas," is a legendary site today, but was unknown to outsiders until 100 years ago.

The abandoned city was thought by archaeologists to have been an estate built for the Incan ruler Pachacuti around 1400, according to the International Union for the Conservation of Nature (IUCN). It was first introduced to the world at large by an American historian in 1911.

The Spanish conquistadors who ravaged Incan territory seem to have never found the city, which accounts for its well-preserved status compared to other Incan ruins, which were often defaced by the marauding Spaniards.

The city's name means "Old Mountain" and the site stands about 7,792 feet (2,430 meters) above sea level in the Urubamba Valley in Peru on the eastern slopes of the Andes Mountains. The ancient city, with its huge walls, terraces and ramps, covers an area of about 126 square miles (326 square kilometers).

The city's "discovery" and history sparked the imagination of plenty of tourists, who began flocking to the site. In 2003, some 400,000 people visited, according to the IUCN.

But Machu Picchu's popularity as a tourist attraction has also brought it under threat, for example, with stones removed to create a helicopter landing site.

The area's flora and fauna can also be impacted by streams of visitors. The site is located in an ecosystem called High Jungle, which ranges from dry mountain forests at low elevations to the mountaintop vegetation.

The IUCN notes that the site boasts more than 400 species of orchids, begonias, trees and bushes and 400 types of birds.

Machu Picchu and its surrounding area were declared a Peruvian Historical Sanctuary in 1981 and a UNESCO World Heritage Mixed Site in 1983.

To better protect the site against encroaching tourist business interests, the World Monuments Fund placed Machu Picchu on its 2008 Watch List of the 100 Most Endangered Sites. UNESCO has also considered placing it on its List of World Heritage Sites in Danger, and the site is being monitored to help ensure its preservation.