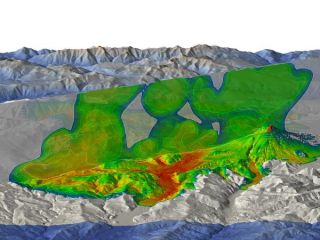 A new 3-D model of a volcanic explosion, based on the 1980 eruption of Mount St. Helens, could help researchers understand some of the mysteries of volcanic blasts.

The model could enhance scientists' understanding of how some volcanic explosions occur and help identify blast zones for potentially dangerous volcanoes , according to an international team of volcanologists.

Mount St. Helens erupted catastrophically on May 18,1980, with astonishing energy and tons of debris, in an event known as a lateral blast. The blast lasted less than five minutes, but caused severe damage over 230 square miles (596 square kilometers), killing 57 people and destroying 250 homes and 47 bridges.

The damage was not caused by lava flows, but by a fast-moving current of superheated gas that carried with it a heavy load of debris.

"Volcanic lateral blasts are among the most spectacular and devastating of natural phenomena, but their dynamics are still poorly understood," the researchers wrote in the current issue of the journal Geology.

The researchers created the 3-D model using the parameters of the Mount St. Helens blast , including equations to determine mass, momentum and the heat energy of the gas.

The 3-D model reproduced the Mount St. Helens blast, closely matching the complicated boundaries of the region of devastation and observed results on the ground. In the model, the areas where pressures imply that trees would be blown down fit the actual locations of destroyed forests.

"The calculations provided much insight into internal dynamics of the blast explosion cloud that could not be observed directly," said study team member and Penn State geologist Barry Voight.

According to the researchers, the most important factors controlling where the blast travels and causes damage are a combination of gravity and the shape of the terrain. Pyroclastic blasts, flows of super-heated gases, are blocked by mountains and channeled down ravines and canyons.

Previous models of the Mount St. Helens blast considered it to be dominated by a supersonic expanding jet of gas that originated at the volcanic vent. However, the research team suggests that apart from an initial burst that affected a region less than 3.6 miles (5.8 km) from the vent, the blast current was gravity-driven.

The researchers found that as the distance from the vent increased, the blast current weakened because of the energy lost while trying to go over obstacles. The results also show spreading in all directions caused a slowing of the flow and that as particles dropped out of the debris flow, they removed energy from it.

The researchers note that "such an improvement in our modeling capability will make it possible to more effectively map potential blast flows at blast-dangerous volcanoes worldwide."