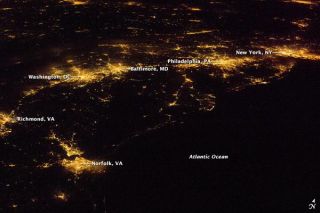 The home fires burn bright: This photograph was snapped by an astronaut aboard the International Space Station as the spacecraft streaked above Earth.
(Image: © NASA/ISS.)

As metropolitan areas expand in both physical area and population, they typically aggregate to form economically, politically and, to some extent, socially linked entities known as conurbations. The term megalopolis has also been used.

One of the largest conurbations in the world is located along East Coast of the United States, and has been termed the Atlantic Seaboard Conurbation (ASC). The ASC extends over 600 miles (1,000 kilometers) and includes the major economic, governmental and cultural centers of Boston, Massachusetts; New York, New York; Philadelphia, Pennsylvania; Baltimore, Maryland; and Washington, District of Columbia.

This astronaut photograph includes every metropolitan area in the ASC except for Boston (located off the image to the northeast). This night image highlights the position and extent of each metropolitan area through urban lighting patterns. The establishment and growth of the conurbation was facilitated by transportation networks railroads, highways, and air travel routes for the transfer of goods, materials, and population between the cities.

Two other large metropolitan areas are visible in the image Norfolk and Richmond, Virginia, at image lower left but neither is considered part of the ASC. In contrast to the city lights along the sea coast and interior, the Atlantic Ocean appears as a featureless dark region filling the lower right quarter of the image.

Astronaut photograph was acquired on April 6, 2011.