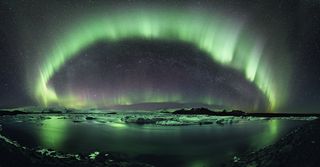 'A Starry Night in Iceland' by Stephane Vetter (http://www.nuitsacrees.fr/). First prize in the Beauty of the Night Sky category. An aurora dances over Iceland.
(Image: © Courtesy of TWAN (www.twanight.org).)

Despite our millennia-long obsession with stargazing — it's recorded in everything from our ancient monuments to primitive art to modern-day TV shows — many humans today will never witness the magnificent scale of the stars' and planets' nightly light show, scientists say.

Light pollution, the scourge of stargazers everywhere, is increasingly blotting out the celestial dazzle once available to all.

Wish you could get the views your great-great-grandparents may have gotten just by stepping out the front door? Take a look at the winning photographs in this year's Earth & Sky Photo Contest, put on by The World at Night (TWAN), an international organization dedicated to night-sky photography. [Related: See all the Contest-Winning Photos.]

Catch a glimpse of a shimmering aurora, the riot of stars above an Alpine village, or an apocalyptic yellow sky over Portland, Oregon.

About 240 entries poured in from 30 different countries. Judges selected 10 winning images in two categories — photos that showcase light pollution's effects, and photos that reveal the beauty of dark skies unsullied by invading lights.

One of the judges said that although the winning images are all incredible, the contest is about more than just pretty pictures.

"When you're out under a really dark sky and you see the stars and the other planets as they move in their orbits, it shows us something about our place in the universe," said Mike Simmons, president of Astronomers Without Borders, an education organization. "You realize you're a part of something much larger than what we experience in our daily life."

The photographs that capture views free of light pollution are from spots as varied as Iceland, California and China, but far removed from urban sprawl.

Because of light pollution, as much as two-thirds of the world's people can no longer see the Milky Way, the cloudy swath of stars that indicates the arc of our galaxy, according to some NASA estimates. It's a situation Simmons described as sad, and one that has economic consequences as well.

"We're spending enormous amounts of money shining light up into the sky that is purely waste. It's like watering your lawn, but half of the water goes the wrong way," Simmons told OurAmazingPlanet, adding that if reflectors were affixed to the tops of streetlights and other offenders, cities could cut down on their power usage.

"You'd get twice as much light on the ground and less in the sky," Simmons said.

The photo contest, now in its second year, proved extremely popular. Organizers are already planning for next year's competition, which will continue TWAN's mission to highlight the incredible views available right here on Earth.

"If you just don't have lights shining in your eyes at night, you can see the most amazing sights for yourself," Simmons said. "It doesn't require a spacecraft."