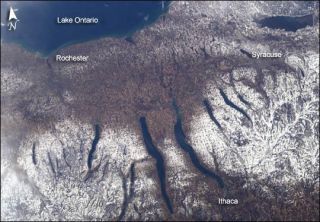 The Finger Lakes of central New York are visible in this images captured by astronauts aboard the International Space Station.

Shapes of the area's snow-covered hills are accented by the low sun angles, and contrast with the darker, finger-shaped lakes filling the region's valleys.

The steep, roughly parallel valleys and hills of the Finger Lakes region were shaped by advancing and retreating ice sheets that were as much as 2 miles (3.2 kilometers) deep during the last ice age (2 million years to about 10,000 years ago).

River valleys were scoured into deep troughs; many are now filled with lakes. The two largest lakes, Seneca and Cayuga, are so deep that the base of their lakebeds are below sea level.

The cities of Rochester, Syracuse, and Ithaca are included in the image. These three cities enjoy large seasonal snowpacks, thanks to the influence of the Great Lakes producing lake-effect snowstorms .

Despite its reputation for long winters, the region is balmy compared with the glacial climate present when the landscape was carved. At the time of the greatest ice extent, yearly average temperatures over northern North America were several degrees lower than today.