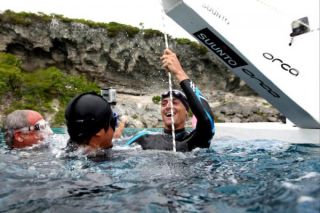 A New Zealand man has broken his own record for the deepest dive without swimming aids.

On his second try of the day yesterday morning (Dec. 13), 30-year-old free diver William Trubridge plunged 100 meters (328 feet) below sea level off an island in the Bahamas, the New Zealand Herald reported. The 100-meter mark has been met before, but with aids.

He is the first man to dive this deep without any assistance, breaking his own record of 96 meters (315 feet). [Related: Infographic: Tallest Mountain to Deepest Ocean Trench .]

Trubridge said his body was on "autopilot" during the dive and he does not remember much of it.

"I remember my depth alarm going off and pulling the tag from the bottom plate, 100 meters below the surface," Trubridge told the Herald. "I remember keeping my eyes half-closed and telling myself to 'relax' and 'flow' as I set off on the long swim back towards the light. And I remember erupting into celebration with my team the moment the judges displayed their white cards."

At this depth, the pressure from the water overhead squeezes the lungs, shrinks the blood vessels and slows the heart, and can trigger the so-called "rapture of the deep," which is a loss of feeling and movement.

The French free diver Jacques Mayol was the first diver to reach 100 meters, in 1980, but he used weights to quickly pull himself down and floats to return to the surface.

This discipline has been recognized since 2003 and is the youngest recognized by the International Association for Development of Apnea (AIDA) International, which oversees competitive breath-holding events such as free diving.

The dive lasted 4 minutes and 10 seconds, according to the AIDA records, and was Trubridge's 13th record breaker. In 2006, he dove a record 80 meters (262.5 feet) and has since pushed the record deeper on his own.