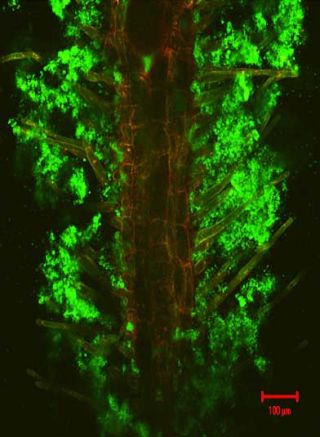 The green represents the beneficial bacterium Bacillus subtilis, which has formed a biofilm on the roots of Arabidopsis after the leafs sent down a cry of help. Photo by Thimmaraju Rudrappa

When injured, plants can cry for help via a chemical phone call to the roots.

If under attack by a pathogen, such as disease-causing bacteria, a plant's leaf can send out an S.O.S. to the roots for help, and the roots will then secrete an acid that brings beneficial bacteria to the rescue, scientists announced today. The finding builds on research earlier this year showing that parasitic plants can tap into a host plant's communication system.

"Plants are a lot smarter than we give them credit for," said Harsh Bais, assistant professor of plant and soil sciences at the University of Delaware. "People think that plants, rooted in the ground, are just sitting ducks when it comes to attack by harmful fungi or bacteria, but we've found that plants have ways of seeking external help," he notes.

To figure this out, Bais and colleagues infected the leaves of the small flowering plant Arabidopsis thaliana with a pathogenic bacterium, Pseudomonas syringae. The plants started to look sickly.

However, the infected plants whose roots had been inoculated with the beneficial microbe Bacillus subtilis were perfectly healthy.

Farmers often add B. subtilis to the soil to boost plant immunity. It forms a protective biofilm around plant roots and also has antimicrobial properties, Bais said.

Using molecular biological tools, the scientists detected the transmission of a long-distance signal, a “call for help,” from the leaves to the roots in the plants that had Bacillus in the soil. The roots responded by secreting a carbon-rich chemical — malic acid.

All plants biosynthesize malic acid, Bais explains, but only under specific conditions and for a specific purpose. In the lab tests, the chemical was actively secreted to attract Bacillus. Magnified images of the roots and leaves showed the ratcheted-up defense response provided by the beneficial microorganisms.

The scientists are now trying to figure out exactly what the signal is that's sent down to the roots.

The research, funded by the National Science Foundation and the university, will be detailed in the November issue of the journal Plant Physiology.