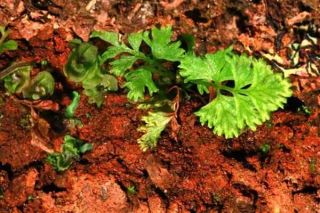 A tiny fern that resembles a parsley plant and was long thought to be extinct has been rediscovered on Ascension Island in the South Atlantic as part of an effort to save the plants of the British territory.

A once common species

The diminutive fern has delicate, yellow-green leaves, which resemble miniature sprigs of parsley.

It has always been restricted to Green Mountain, but was once relatively common according to the description of eminent botanist Sir Joseph Hooker, who visited the island in 1876.

Although recorded again in 1889, there were few if any further records until British scientist Eric Duffey collected a specimen on the north side of the mountain in 1958. It was not seen again, and was officially declared extinct in 2003.

Just why the fern disappeared isn't known, though scientists suspect that it faced stiff competition from the non-native introduced maidenhair ferns (Adiantum species) that could have overwhelmed most of the suitable rock ledges on the mountain and devastated the native crevice-living flora.

The rediscovery of the parsley fern is only the first step of a rescue story that has quietly unfolded over recent months. While the team who found the plant was initially excited, it was clear that the conservation team had to mount a last ditch effort to save the unstable population.

Relocating the plants was ruled out and so Stedson and his colleague Olivia Renshaw pampered the plants twice a week, scrambling down the ridge with a safety rope to water and weed the patch.

"Finding it was difficult. Carrying water and hanging onto the safety rope was even harder," Stedson said. "However, we will do whatever it takes to keep these ferns alive."

Thanks to the care of the two scientists, two of the original four plants survived long enough to produce spores.

Parsley ferns are sensitive plants, and the best chance of successful cultivation was to get them into sterile conditions. The Royal Botanic Gardens, Kew (RBG Kew), a partner in the Ascension project, agreed to help.

The task wasn't easy though; once harvested, the spores were vulnerable to drying and contamination, and the team had just 24 hours to transfer the precious cargo to the laboratory in RBG Kew's Conservation Biotechnology Unit (CBU).

On the day of the transfer, spores were collected, placed in a sterile container and then rushed to the airfield to be flown to RAF Brize Norton, Oxfordshire, England, where a car was waiting to race them to Kew Gardens.

With the clock ticking, the spores arrived. They were extracted and pronounced to be viable to cheers from RBG Kew's U.K. Overseas Territories conservation team.

Since then, scientists were able to rear a large number of young sporelings, which are flourishing well in cultivation. Meanwhile, the team in Ascension has also had success with rearing sporelings of their own, and after further intensive searches they have found a small number of additional parsley fern plants growing near the location of the original find.

Ascension is a geologically young island, covered by bleak, forbidding lava flows, which have never made it a comfortable place for plants to evolve. Only 10 species are known to be truly "endemic" found nowhere else in the world.

Goats were released onto Ascension by Portuguese explorers in the 1500s, and ate their way voraciously through the island's greenery for 350 years before the flora was even described to science. By this stage, there wasn't much left, and the introduction of rabbits, sheep, rats and donkeys, together with more than 200 species of invasive plants , further squeezed out the island's original plant inhabitants.

With the rediscovery of the parsley fern the island's surviving six endemic plant species are now boosted to a magnificent seven. It is hoped that the rediscovered parsley fern will be restored eventually to some of its former wild habitats on Green Mountain, where it perhaps once played a role in helping to stabilize the crumbly cinder cliffs of the mountain.

Despite this success story, all of Ascension's endemics remain dangerously close to extinction, and dedicated efforts, like those mounted to save the parsley fern, are needed to prevent the loss of a unique part of the United Kingdom's biodiversity heritage.