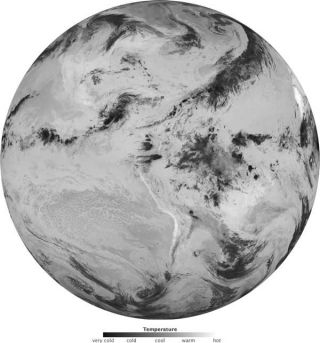 This image shows the temperatures of clouds and the Earth's surface as measured by NASA's GOES satellite on May 30, 2010.
(Image: © Rob Simmon/GOES/NASA)

The role that Earth's clouds play in influencing the processes that are causing the planet to warm is one of the bigger unknowns in global warming science, though scientists are continually using new methods including research based on satellite images to try and tease out that role.

In a new image from NASA's GOES Earth-observing satellite, the temperatures of clouds over the Western Hemisphere are shown, which in turn can be an indicator of the potential of these clouds to contribute to or mitigate global warming .

The GOES image illustrates that that low clouds emit about the same amount of thermal energy as Earth's surface does. This is most clearly seen over the Pacific Ocean. The water is nearly white, while the low marine clouds are pale gray, only slightly cooler.

Clouds impact temperatures in other ways as well. They also reflect incoming energy from the sun, shading and cooling the Earth.

A recent study posited that clouds could be one of the reasons the early Earth didn't freeze over, despite the fact that the sun was weaker in the past and so sent less energy to the Earth. Clouds on the early Earth could have been thinner and therefore let more sunlight reach the planet's surface, warming it more.