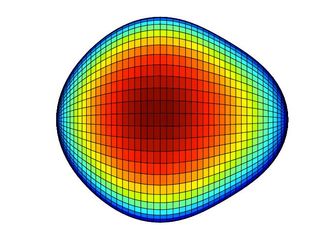 Scientists have found some atoms have pear-shaped nuclei, rather than the spherical or football-shaped ones. Here, a representation of the radium-224 nucleus in the x, z plane, with the colors as the y-axis scale.
(Image: © LP Gaffney)

The lopsided nuclei, described today (May 8) in the journal Nature, could be good candidates for researchers looking for new types of physics beyond the reigning explanation for the bits of matter that make up the universe (called the Standard Model), said study author Peter Butler, a physicist at the University of Liverpool in the United Kingdom.

Whereas most atoms have spherical or football-shaped nuclei, atoms with pear-shaped nuclei at their centers have been predicted to exist. But finding them proved difficult. [See Video of the Strange Pear-Shaped Nuclei]

To find them, Butler and his colleagues used a particle accelerator called REX-ISOLDE at the European Laboratory for Particle Physics, or CERN, in Switzerland to accelerate radioactive ions of radon-220 and radium-224 until they reached about 10 percent of the speed of light.

"The [Large Hadron Collider] LHC makes all the big news, but in order to get the particles to high energy it uses a whole chain of low accelerators. What we use is one that is pretty ancient by accelerator standards," Butler said.

The gamma-ray intensities "tell us how probable it is to excite quantum states in the nucleus, and that probability is directly related to the charge distribution in the nucleus," Butler told LiveScience.

The distribution of positive charge in the nucleus revealed the nuclei were lopsided. By doing further analysis of the gamma-rays, they could re-create the nuclear shapes.

The findings could help scientists search for physics beyond the Standard Model, said Witold Nazarewicz, a theoretical nuclear physicist at the University of Tennessee-Knoxville and Oak Ridge National Laboratory, who was not involved in the study.

Specifically, the pear-shaped nucleus could provide a good place to search for an electric dipole moment, or an asymmetrical distribution of positive and negative charge inside neutrons. An electric dipole moment would provide a way to test extension theories to the Standard Model, such as supersymmetry, which could help explain why there is more matter than antimatter in the universe.

"There are strong theoretical suggestions that in nuclei that have those pearlike shapes, that this electric dipole moment can be very large," Nazarewicz told LiveScience. "These systems are very good hunting grounds for future searches for this dipole moment."