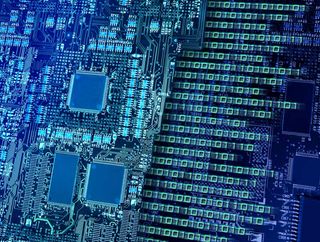 Most data is secured on the internet using cryptography, but conventional techniques can be hacked with enough time and computational power.
(Image: © Anteromite | Shutterstock)

A national laboratory has been running a quantum network that could make perfectly secure Internet communications a reality.

Though the new technology, described May 1 in the preprint journal arXiv.org, is still being run in a test network, the technology could be the first economical and scalable quantum cryptography that could be used with existing fiber-optic networks, specifically on the networks that run electrical grids and other critical infrastructure.

In cryptography, computers send coded messages that require a key to decipher. But existing encryption techniques aren't perfectly secure — with enough computational power and time, they can be hacked.

The idea relies on one of the bizarre consequences of quantum mechanics — namely, that when a photon of light travels from one point to another, it travels in an indeterminate state. An observer can't know it's orientation, or polarization, without disturbing the photon and changing its outcome. [Wacky Physics: The Coolest Quantum Particles Explained]

Thus, if a secret message gets encrypted with a quantum key encoded in a photon's initial state, then any outsider trying to intercept the message would disturb the particles, thereby changing the key.

Although quantum cryptography is perfect in theory, it doesn't work with existing networks because the quantum key needs to be shared with every node, or connected point in a network, and that requires big, costly photon detectors at each node. So, as a network gets bigger, the system gets rapidly cumbersome.

"It's expensive, and it doesn't fit into the normal architecture of optical fiber networks," said study co-author Richard Hughes, a physicist at Los Alamos National Laboratory in New Mexico.

But for more than two years, Hughes and his colleagues have secretly been running a small test network that may surmount those problems.

Instead of connecting every node to every other one, the nodes in the test network are connected to a central hub, like spokes on a wheel. A quantum key is used to encrypt messages sent from the spokes to the hub and back out again. As long as the hub is secure, the rest of the system is as well.

In the new scheme, only the hub can read the quantum keys. The cost and size savings come from the fact that the outer points in the network don't read the keys with costly photon detectors, but instead send the quantum keys using tiny laser transmitters. (The spokes can read classical messages, just not quantum messages).

To send a message from one point to another (say, from A to B), both nodes will separately send a quantum key to the hub. Node A will then send along its encrypted message, which the hub decrypts, and then sends it along to B using the encryption scheme that B deciphers using the quantum key B sent to the hub.

The new approach is more economical, and because it uses a hub-and-spoke architecture, as many optical fiber networks do, it can easily be plugged into existing infrastructure, Hughes said.

The researchers say their new system could be used to protect critical infrastructure, such as electrical grids. For those applications, "we think this could be the solution," Hughes told LiveScience.

Next year, they plan to test the system on the electrical system at the lab.

They also envision a more distant future where people dock their laptops or tablets into a secure network, storing quantum cryptographic keys to be used for securing phone calls or emails made later, outside the network.