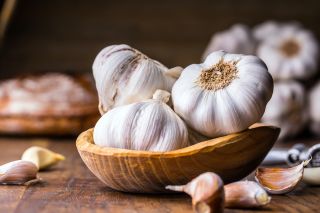 Cooks know there's a huge difference between raw and cooked garlic. If you've ever gnawed on the raw form, you know it too. What a bite. When cooked, it is mellower.

A new study reveals why.

Raw garlic is full of sulfurous compounds, including a chemical called alliin. When a clove is bruised, chopped, or crushed, the alliin is quickly converted to a chemical known as allicin. That's the stuff that makes raw garlic stingingly pungent. It actually activates two human proteins, called TRPV1 and TRPA1, that interact with pain-sensing neurons in your mouth.

But when the garlic is cooked, the allicin is converted into other sulfur molecules.

The new study found that this change is what results in reduced pungency. The work was done by scientists at the Scripps Research Institute, the Genomics Institute of the Novartis Research Foundation, and the Korea University College of Medicine. It is detailed in journal Current Biology.

Garlic originated in Central Asia. The Egyptian and Babylonians, Greeks and Romans all knew of it. Nearly 300,000 metric tons are now produced in the United States each year.

The unusual combination of chemicals in garlic may have evolved as a way to protect the bulb, which grows close to the surface in arid climates, researchers say. Ticks, mosquitoes, worms and some birds are indeed repelled by the smell.

The study could help scientists figure out ways to suppress the pain sensors involved in tasting the wildness of raw garlic, the scientists said. They did not look into any possible cure for garlic breath, however.