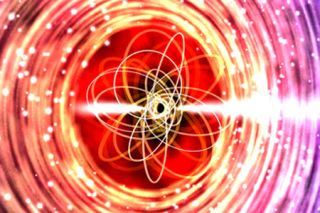 In a match-up between quantum theory and the general theory of relativity, Einstein's theory has once again come out victorious: this time in an orbiting pair of ultra-dense stars.

The star pair, about 7,000 light-years from Earth provides a unique opportunity to test the boundary between two theories of physics, according to SPACE.com.

Though Albert Einstein's theory of relativity beautifully predicts how the gravity of massive objects curves space-time, it isn't complete: it can't explain the weird behavior of the ultra-small world, which is described by quantum mechanics.

For extremely small, yet extremely massive objects, such as black holes, the two theories clash and scientists have no physical description of exactly what goes on.

Enter the star pair. The couple, an extremely massive neutron star that spins around 25 times per second orbited by a tiny white dwarf, is both massive and tiny enough to reveal the behavior at the boundary between the two theories.

The white dwarf is an aging star that is cooling down over time. The neutron star is twice the mass of the sun, yet is just 12 miles (19 kilometers) wide, making gravity on the surface of the star 300 billion times as strong as Earth's pull, SPACE.com reported.

"A quick, on-the-spot analysis made me realize that the pulsar was quite a heavyweight. It is twice the mass of the sun, making it the most massive neutron star that we know of and also an excellent laboratory for fundamental physics," John Antoniadis, a doctoral student at the Max Planck Institute for Radio Astronomy and lead author of a paper reporting the find, published in the April 26 issue of the journal Science, told SPACE.com.

To see whether Einstein's theory held in the system, the team looked at the motions of the binary system. General relativity holds that massive objects warp space-time such that light will follow a curved path when under its pull. This particular binary star system should radiate ripples in space-time, known as gravitational waves. Alternate theories predict that the white dwarf would move slightly differently.

"Our radio observations were so precise that we have already been able to measure a change in the orbital period of 8 millionths of a second per year — exactly what Einstein's theory predicts," Paulo Freire, another team member at the Max Planck Institute, told SPACE.com.

Though the new study can't solve the conflict between quantum mechanics and general relativity, other experiments, such as the Laser Interferometer Gravitational Wave Observatory, will hunt for other gravitational waves to test Einstein once again.