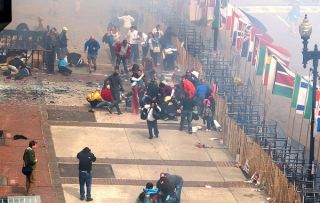 Like the Sept. 11 terrorist attacks, the Sandy Hook massacre and other tragedies, the recent Boston Marathon bombing has spawned several conspiracy theories. Some of the more cynical conspiracy theorists do it simply for attention and ratings, or to promote their books, DVDs and seminars promising to reveal the truth that no one else would dare.

These days most conspiracy theories are promoted by one or two (relatively) high-profile people. A man named Alex Jones was at the forefront of the conspiracy theories surrounding the Sandy Hook school attack last year — including the claim that the shooting didn't really happen. This time around, former Fox News host Glenn Beck is among those leading the charge that a conspiracy is afoot in the Boston bombing case that left several dead and one suspect, Dzhokhar Tsarnaev, in the hospital.

Beck is apparently not denying that the Boston bombings took place — the thousands of eyewitnesses, countless videos and forensic evidence is too overwhelming to be dismissed. No, instead the conspiracy seems to center around what Beck believes is the suspicious government handling of a Saudi national named Abdul Rahman Ali Alharbi, who was supposedly investigated (and cleared) of some connection to the Boston attack, but whose student visa had expired, and who may or may not be in the process of being deported back to Saudi Arabia. [The 10 Most Bizarre Conspiracy Theories]

What, exactly, is Beck claiming happened? That Ali Alharbi is the real killer, and the Tsarnaev brothers were just innocent patsies? That the three of them worked together to execute the plan (despite Dzhokhar Tsarnaev's statement to police that he and his brother worked alone)? Or was that a lie, too? Maybe one of Tsarnaev's doctors or nurses at the hospital is really an undercover Saudi agent who drugged or threatened Tsarnaevinto saying the brothers acted alone, to cover up Ali Alharbi's role?

In the end it doesn't really matter: In the world of conspiracies, one wild theory is as good as the next; it all depends on how far down the rabbit hole you want to go. Conspiracy theorists are in the business of raising questions, not providing answers — even for their own claims.

Often those who promote conspiracy theories frame them as simply asking legitimate questions — and who can deny that everyone has the right to ask questions of their government and news media? The problem is that the questions they ask are often non-questions that can be (and have been) easily answered. Conspiracy theorists prefer complex mysteries over simple truths, and so they find mystery where none exists.

Big events like terrorist attacks often spawn conspiracy theories, because they carry social and political freight; they mean something to the public. Conspiracy theories do not arise around small, local events no one cares about. Instead events with international implications, such as the moon landing, terrorism and the deaths of John F. Kennedy and Princess Diana, feed the conspiracy mill.

People who embrace and promote conspiracy theories do so for a reason — typically because it bolsters their (often anti-government) social or political agendas. Conspiracy theories don't emerge in a vacuum; instead, there are people who are simply waiting for each new tragedy to occur so that they can frame it in a way that suits their purposes. For example, many people seized upon the Sandy Hook massacre as a faked event staged to rally public support for stricter gun control laws. [5 Milestones in Gun Control History]

They seek out what appear to be contradictions or holes in "the official story." Conspiracy theorist websites offer "suspicious" examples and evidence, ranging from real or perceived contradictions in eyewitness accounts to conflicting news reports. But what the conspiratorial mind sees as misinformation and lies, others see as merely perfectly ordinary incomplete and inaccurate information following a chaotic tragedy. Eyewitnesses can be confused and mistaken, police officers and reporters can make errors, or repeat information that is corrected after further investigation.

Part of the reason that conspiracy theories linger is that any contradictory evidence — no matter how conclusive or compelling — can just be dismissed by claiming that it's part of the cover-up. Conspiracy theories have been with us for millennia, and are not going away any time soon.

Benjamin Radford is deputy editor of "Skeptical Inquirer" science magazine and author of six books, including "Media Mythmakers: How Journalists, Activists, and Advertisers Mislead Us." His website is www.BenjaminRadford.com.