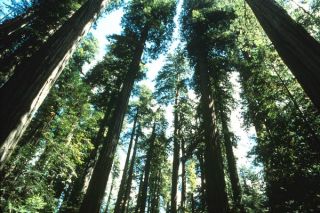 California's giant redwoods will now be found in six foreign countries. A new non-profit group is shipping 18-inch (46 centimeters) saplings of the trees for people to plant to help fight deforestation and climate change, according to USA Today.

The trees are actually clones of enormous redwoods that were cut down more than a century ago. But these hardy trees have kept sprouting shoots, from which these trees were cloned by Archangel Ancient Tree Archive, a non-profit group spearheading the project. "This is a first step toward mass production," David Milarch, the group's co-founder, told USA Today. The trees will be planted today (April 22), Earth Day, in Australia, New Zealand, Great Britain, Ireland, Canada, Germany and the United States.

The idea is that these trees, amongst the largest on record, are genetically superior to other redwoods (though some scientists disagree). And if all goes right, their descendants will grow large, one step toward creating forests and consuming carbon dioxide. "We need to reforest the planet; it's imperative. To do that, it just makes sense to use the largest, oldest, most iconic trees that ever lived," Milarch was quoted as saying.