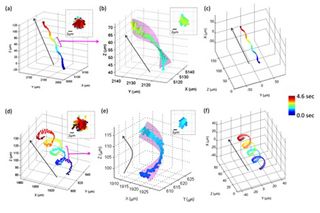 Aydogan Ozcan is an expert on optics and imaging and leads the Bio- and Nano-Photonics Laboratory in the Electrical Engineering and Bioengineering Departments at UCLA. He contributed this article to LiveScience's Expert Voices: Op-Ed & Insights.

This past week, our research team announced the discovery of an entirely new pattern of movement for a familiar microscopic swimmer: sperm.

In specimens from both humans and horses, we were able to track thousands of cells at once to identify a sperm swimming pattern we had never before seen. The unusual, coiled-ribbon pattern was significantly more complex than sperm swimming patterns we observed last year, all findings that could have implications for fertility, health and our understanding of the microscopic world.

Finding the new swimming pattern was a difficult observation to make, since the motion occurs at lengths that are smaller than one millionth of a meter. We had to develop special microscopy techniques that could achieve the necessary high resolution and fast frame rates.

Techniques we and other researchers developed for three-dimensional (3D) tracking of microscopic swimmers — such as sperm, protists or bacteria — had already revealed the unique swimming patterns of those organisms, including helical, star-spinning and flat motions that lie within a single plane. However, the new patterns, which we call chiral ribbons, remained undiscovered until now. [See Video of Spriraling Sperm in 3D]

While specialized lenses could provide the necessary magnification for us to observe such microscale, rapid events, lens-based microscopes are generally not well-suited for looking at a large number of objects scattered in a big volume.

Instead, we rely on an emerging set of techniques that use computation as a replacement for the physical function of lenses. Those new approaches can track a significantly larger number of individual, microscopic trajectories in 3D.

To execute those computational imaging techniques, we place samples (such as the sperm cells) onto a silicon sensor chip, the same image sensor that you might have on the back of your cellphone. By simply shining light onto the sample, we create shadows of the microscale objects and dynamically record them.

The shadows form holograms of the specimen, which we can digitally process to create an image of the micro-object without using any lenses. Our approach has a much higher throughput than others, and is better suited to reveal rare and unconventional 3D swimming events that occur at the microscale.

By simultaneously using two different wavelengths of light shining at separate angles (vertical and tilted at 45 degrees), our most recent imaging technique revealed an entirely new swimming pattern for human and horse sperm. The research was published on April 16 in Scientific Reports, a journal of the Nature Publishing Group.

To track those unique 3D patterns, we used computational holographic imaging to follow more than 33,700 sperm cells at a high frame rate (up to 140 frames per second) over a relatively large sample volume of nine microliters — more than 10 times what a lens-based optical microscope could achieve.

In summary, our results illustrate and quantify the parameters of an entirely new swimming pattern — chiral ribbons — and could help us better understand the statistical behavior of various microswimmers, possibly shedding light onto the biophysics of their 3D motion.

This research could lead to a deeper understanding of how sperm move on their way to fertilization, or other functions, and how they react when encountering various stimuli including chemicals or toxins. [Higher Sperm Counts Are a Breeze with a Kilt]

The same high-throughput technique can also be translated to better understand motion of other microscopic swimmers, including harmful bacteria.