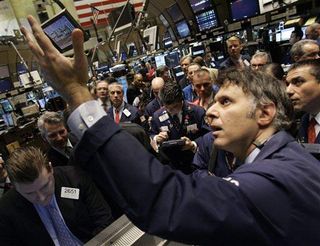 Traders on the floor of the New York Stock Exchange, Tuesday, March 18, 2008, digest the Federal Reserve's decision to cut interest rates by three-quarters of a percentage point. Many investors had expected a cut of a full percentage point.
(Image: © AP Photo/Richard Drew.)

This article was reported by Robert Roy Britt, Jeanna Bryner and Clara Moskowitz.

Given the nation's dismal financial situation this week, not to mention this year, many people are pondering a present and future with less money in the bank. Does that mean that as a nation we'll be less happy?

For a while, perhaps.

But researchers and analysts say finances, as well as moods, will bounce back.

Meanwhile, the experts advise against panicking in these uncertain times. The accounts of the not-so-wealthy are protected by the Federal Deposit Insurance Corporation (FDIC), which guarantees our deposits for up to $100,000 ($200,000 for couples), explains Cristian Pardo an economist at Saint Joseph's University in Philadelphia.

"By definition, that is better than putting the money under the mattress," Pardo said today.

Money can buy a measure of happiness, says sociologist Glenn Firebaugh of Pennsylvania State University. But the happiness is derived mostly from comparing our "wealth" to the financial situations of others in our age group, rather than simply adding up the stuff one can buy, Firebaugh and colleagues found in a 2005 study.

So if the national piggy bank goes empty, what will our mood be?

"In the short run, we will be less happy as we lose ground financially, because we will compare our poorer financial situation to what we had before," Firebaugh said today. "But in the long run I don't think we will change all that much — people are resilient."

Already, the nation's anxiety is palpable.

"It definitely affects people's mood and increases anxiety levels, which is not a good thing for a person's happiness," said Aaron Ahuvia, professor of marketing at the University of Michigan-Dearborn.

But everyone is different, and the financial crisis will impact each person a little differently.

"When people who have a higher propensity toward anxiety hear news like this, they tend to respond to [the financial crisis] more strongly," Ahuvia said.

"People who are senior citizens and perhaps had direct experience with the Great Depression will respond to this much more strongly than people who are younger and grew up in periods of financial stability. Younger people tend to have a mental model where the economy has occasional bumps, but basically things are OK," Ahuvia said.

Jeff Larsen, a psychologist at Texas Tech University, sees the small picture. "What affects our happiness more so than what's going on in the larger world is what's happening to us on a day-to-day basis — Do we enjoy what we do? Do we enjoy who we spend our time with? Do we have meaningful social relationships, people we can count on?"

Larsen added, "If we get such a meltdown that people lose the ability to do the things they enjoy, there is a risk that the nation as a whole will be less happy."

Other research suggests we'll be just fine with less money, however, once we adjust.

The problems with money

A report in the journal Science in 2006 found that while people expect money to provide toys and fun, in fact, the relatively well-off — both men and women — tend to be tense and spend less time relaxing. Of course, everyone has his own definition of well-off. In the case of this study, men who make more than $100,000 a year spend 19.9 percent of their time watching television, socializing or doing other passive leisure activities, while those making less than $20,000 spent more than 34 percent of their time doing this stuff — basically nothing.

Money brings on a host of problems. Baby Boomers, as a broad example, make up one of the most well-off generations in U.S. history. But they are, as a lot, relatively miserable. In a survey earlier this year by the Pew Research Center, Boomers were found to be gloomier about their lives and the prospects for improvement than younger and older generations.

Perhaps nothing defines Boomers more than the treadmill of materialism, our national desire to keep up with the Joneses during several decades of robust economic growth.

"Rather than promoting overall happiness, continued income growth could promote an ongoing consumption race where individuals consume more and more just to maintain a constant level of happiness," Firebaugh hypothesized back in the 2005 study.

An editorial in the British Medical Journal that same year put into perspective the problem with human nature in this regard: "As we realize one set of aspirations, it seems we immediately trade up to a more expensive set, to which we transfer our hopes for happiness."

Assuming you want to hang on to your life savings, however, advice from several experts is similar: Hang in there, and be cautious.

The proposed $5 billion investment into Goldman Sachs by stock market whiz Warren Buffet this week offers some sage advice about market timing. First: Don't try it if you're not Warren Buffet. Second: Don't sell when everyone else is selling.

"Now is not the time to sell off your stocks," said George Morgan, professor of finance at Virginia Tech. "But you should only invest to the extent that you are comfortable with the risk."

Selling now, for those who have these assets, would be trying to time the market, Morgan told LiveScience in an email interview. "This is notoriously hard to do — just look at the huge losses incurred by the investment banks lately, and those are the professionals! In trying to time the market, one is tempted to sell at just the wrong times and buy at just the wrong times."

Anyone interested in the stock market should invest in strong companies and think for the long term, advises Syracuse University Finance Professor Yildiray Yildirim, who suggests waiting a couple of months as stock prices may fall further.

"If they like to invest on real estate, I would suggest they wait until next summer when prices fall even more and buy foreclosures and flip into rentals," Yildirim said.

And in the meantime? Yildirim recommends holding money in money market account, CDs and U.S. Treasuries.

Over time, mutual funds and index funds (not individual stocks) are good picks for most investors under age 50 or so, Pardo said. These funds are riskier than CDs, but over time they tend to return more, so if you don't plan to retire for 25 years, for example, they make sense, he said. "But if you are over 50, then this type of strategy is much riskier."

Craig G. Rennie, an associate professor of finance at the Sam M. Walton College of Business in Arkansas, also advised for the long run. "People should be investing on the basis of a long-term investment policy statement (ideally developed with a professional, licensed, and insured financial advisor)," he said. "When a downturn in the markets does occur, if people do not panic but continue to invest on the basis of their long-term strategic asset allocation strategy, they should do fine."

It might also be prudent to invest some time into looking for silver linings. A spouse, say.

Marriage brings greater wealth, according to 2006 study of 9,000 people reported in the Journal of Sociology. And now is definitely not the time to dump your spouse, if you can hang in there or work it out. Divorce reduces a person's wealth by 77 percent compared to that of a single person, the study found.

Or, if you're feeling magnanimous, there's one surefire way to buy some happiness: Give your money away. A study earlier this year in the journal Science found that income translates into happiness only when it is spent on donations or gifts for others.

In the end, happiness depends significantly on attitude, as well as how the current crisis directly affects an individual.

"If you're someone who loses your job or house as a result of this, then absolutely that will affect you," said Ahuvia, the marketing professor. "For those of us who are just hearing it on the news, I would be very surprised to learn that two weeks from now people's overall sense of happiness was measurably affected by this kind of thing."

Other subtle effects could linger.

"I'm worried about how [the financial crisis] affects people's overall sense of optimism," Ahuvia said. "It's not so much the money, but if people feel that they can't pursue their dreams in this economy that's a problem," he said.

No matter how bad it gets, history offers an upbeat lesson.

"Anecdotal evidence suggests that people certainly suffered during the Great Depression, but they were nonetheless able to enjoy the simple pleasures in life," Firebaugh points out. "When it comes to happiness, money is not as important as, say, good health or good friends or a good marriage."