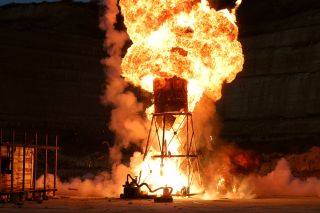 The fertilizer plant explosion in West, Texas, on Wednesday (April 17) killed at least a dozen people and destroyed several blocks of the small town.

Is your neighborhood next?

Investigators have yet to determine the exact cause of the fire and powerful explosion that leveled up to 75 homes, tore the roof off a 50-unit apartment building and severely damaged a nearby nursing home and school, according to ABAJournal.com.

But the disaster is bringing increased attention to the thousands of facilities nationwide that store or manufacture fertilizer, especially ammonium nitrate, an explosive chemical often used in agricultural fertilizers. [Infographic: Why Fertilizer Is Dangerous]

Ammonium nitrate is believed to be the cause of the fireball that was seen about two hours after the blaze started on Wednesday (April 17) evening.

In February, Adair Grain (the owner of the West Fertilizer Co. fertilizer plant) informed the Texas Department of Health Services that it was storing up to 270 tons of ammonium nitrate at the facility, according to NBC News.

The West, Texas, plant is just one of about 6,000 facilities scattered across the country — located in residential neighborhoods, small towns and urban areas — that manufacture, store or sell ammonium nitrate products, a spokeswoman for the Fertilizer Institute, an industry trade group, told NBC.

And most county and municipal zoning regulations don't prevent these facilities from being located near schools, hospitals, homes or other businesses. The nursing home and school damaged by the explosion in West were built several years after the fertilizer plant began operating about 50 years ago.

The recent "tragic explosion points to the need for stricter regulations of plants that store and use large quantities of hazardous chemicals," Tom O'Connor of the National Council for Occupational Safety and Health told NBC.

"We need a system in which facilities that are inherently dangerous are required to develop detailed disaster prevention plans before they're allowed to operate," O'Connor said.

The explosion in West is not an isolated incident. In 2011, a chemical plant explosion in nearby Waxahachie forced the evacuation of about 1,000 residents, according to the Dallas Morning News, including people living in houses that were just 100 feet (30 meters) away.

Around the world, ammonium nitrate has been implicated in dozens of deadly explosions in recent years, including the deadliest industrial accident in U.S. history when almost 600 people died in Texas City, Texas, after two ships carrying the chemical exploded in 1947.

But the board's directors say their small annual budget of just $10.55 million makes meaningful investigations next to impossible.

"We've made innumerable proposals over the years [to Congress] … pointing out the significant discrepancy between the number of serious accidents and the ones that we can handle from a practical standpoint," managing director Daniel Horowitz told the Center for Public Integrity, an investigative news group.