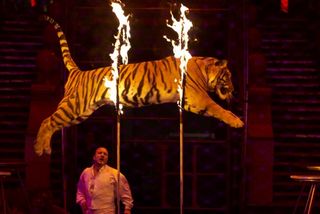 A circus tiger jumps through a ring of fire.
(Image: © Sergey Petrov / Shutterstock.com)

Traveling circuses in the U.K. are now barred from using exotic animals such as tigers and elephants in their acts.

The new law bans wild animals, but domesticated animals such as cats, dogs, rabbits and horses will still be allowed.

The ban was motivated in part by the plight of Anne, a now 60-year-old elephant. In 2011 the animal rights advocacy group Animal Defenders International recorded footage of Anne being beaten by a groom at the Bobby Roberts Super Circus. The owners of the circus were convicted of causing suffering to the animal.

Anne is now retired and living at Longleat Safari Park in the U.K.