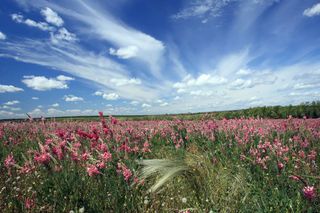 Spring is off to a warm start.
(Image: © © Tatiana Morozova | Dreamstime.com)

Todd Sanford, a climate scientist with the Union of Concerned Scientists, contributed this article to LiveScience's Expert Voices: Op-Ed & Insights.

The transition from winter to spring is one many of us look forward to. We can wear fewer layers, start playing more sports outdoors and finally put the snow shovel back in the shed.

Although winter lingered in some parts of the country this year, spring is already heating up and scientists see the character of spring changing over the longer term. Such changes go beyond just the temperature — with significant consequences.

In the United States, March temperatures have grown hotter by just over 2 degrees Fahrenheit, on average, since reliable record-keeping began in the 1880s. Similarly, the first leaves have started appearing on plants several days earlier than they used to across the country.

I recently worked with three scientists who are studying the effects of warmer springs on snow cover, biological systems and allergens to help shed light on what an earlier, warmer spring actually means.

Snow cover on the decline

Snow pack, which builds over the winter, begins melting in the spring and is a major water source, especially in the drier summer months. Strong, reliable melting and runoff are critical for agriculture and reducing wildfire risks. However, warmer temperatures are leading to a decline in snow cover (a measure of how much land is covered by snow).

Last May, the Northern Hemisphere experienced its second-lowest snow-cover extent on record, said David Robinson, the director of the Global Snow Lab at Rutgers University.

Water managers were also warily eyeing snow pack in California and Colorado this year. Most sites where scientists have collected snowpack data have shown declines over the past 50 years. According to the federal National Climate Assessment draft, ongoing climate change is expected to lead to declines in snow water equivalent, a measure of snow pack, in the U.S. Southwest. Under a higher-emissions scenario, in which heat-trapping gas emissions continue to rise, the assessment projects a 13 percent decline in Colorado snow water equivalent by midcentury and a 34 percent decline in California, compared with historic averages.

Species falling out of sync with the season

Jake Weltzin, an ecologist with the United States Geological Survey and executive director of the USA National Phenology Network (USA-NPN) pointed to several studies that tracked how warmer springs can affect the range for migratory species and lead to mismatches in annual cycles for plants and animals that interact with one another.

For instance, historical data being preserved by USA-NPN revealed that ruby-throated hummingbirds are arriving in the eastern United States between 11 and 18 days earlier than they used to, depending on latitude.

Lewis Ziska, a research plant physiologist at the United States Department of Agriculture, has been a pioneer in research linking higher temperatures and atmospheric carbon dioxide levels increase to allergen production from plants.

Ziska co-authored a review of human-induced climate change and allergen exposure in the Journal of Allergy and Clinical Immunology in January of last year. Such research has found that climate change is linked to longer and more intense allergen production from a number of tree species that flower in the spring, including oak, birch, olive and loblolly pine, though these findings can vary greatly by subspecies and location.

Researchers have found, for instance, that some species of oak are producing pollen four weeks earlier than before. At the same time, warmer winters can lead some tree species to produce less pollen when they flower in the spring.

Later in the year, summer brings allergens from weeds and grasses, which can produce more allergens when exposed to higher temperatures and carbon dioxide levels. Fall ragweed season has also grown 13 to 27 days longer, depending on latitude, as late fall temperatures have increased. At the same time, ragweed pollen production has increased 60 to 90 percent as the climate has warmed. [Worst Allergy Season Ever?]

Setting the stage for more changes

These are just a few of the many warning signs of climate change. They're already presenting challenges for water managers, forest managers and public health professionals. Climate change is here and we're seeing the consequences now.

Decisions need to be made on how to manage these changes, which is why the observations of what's happening on the ground from scientists like Robinson, Weltzin and Ziska are so critical. Those changes are going to likely continue into the future, so the longer-term trends they measure also show us where we're headed.

Responding to climate change isn't just about reacting to what we're facing today, but also about anticipating what we're likely to see decades down the road. Part of that is realizing that spring in the 2050s may not be recognizable compared with the springs we grew up with.