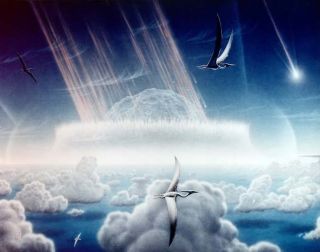 An artist's impression of a giant space rock slamming into Earth 65 million years ago near what is now Mexico's Yucatan Peninsula. A consortium of scientists now says this was indeed what caused the end of the Age of Dinosaurs.
(Image: © NASA/Donald E. Davis)

Many marine plankton species went extinct during the mass die-off of the dinosaurs 65 million years ago. The worldwide rain of tiny dead shells littered marine sediments from the period.

But at least one plankton-eating animal appears to contradict this evidence of a mass plankton extinction, a new study reports. Fossil records of coral-like marine creatures called bryozoans, which survived the killer asteroid impact, show little change across the extinction boundary. The bottom-dwelling animals live in colonies, either erect on the seafloor or encrusted on other organisms such as seaweed. Bryozoan's feather-like filters catch passing plankton and other food particles as they drift past.

If there was a phytoplankton crash, the fossil colonies, from the southeastern United States and Denmark, should have responded to the lack of food. Either there was no phytoplankton crash at the end of the Cretaceous, or the time scale of the extinction is too small to be resolved in the fossil record, the study authors report.