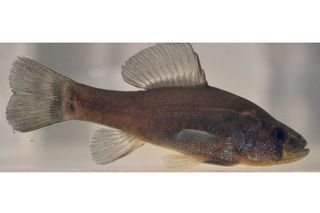 (ISNS) -- An odd little freshwater fish may be using the chemical equivalent of visual camouflage to mask its smell and hide in plain sight, a new study finds.

If the chemical deception is confirmed, pirate perch would be the first animal discovered to use the technique against a wide variety of prey, ranging from insects to amphibians.

The finding, published online in the journal The American Naturalist, could mean that many more organisms use chemical means to hide themselves than scientists currently realize.

"Lots of organisms may be modifying their chemical signals, just like lots of organisms modify their visual signal. It opens up this whole new way of looking at the world," said study coauthor William Resetarits, a biologist at Texas Tech University in Lubbock.

About five-and-a-half inches long and found in eastern North American lakes and streams, pirate perch – so named because they tend to eat other fish in aquariums – already have a reputation of being peculiar.

"As a [scientist], you just look at pirate perch in the context of other North American fish, and you think this thing is a little bit different," said Jason Knouft, an ichthyologist at Saint Louis University in Mo., who was not involved in the study.

Among the pirate perch's oddities: it is the only member of the fish family Aphredoderidae, and its anus is located up near its chin.

But the new study by Resetarits and his colleague, Christopher Binckley of Arcadia University in Penn., suggests pirate perch are unique in another way as well.

In a series of experiments, the scientists showed that aquatic beetles and tree frogs are less likely to colonize ponds containing predatory fish that could eat them or their young, yet don't seem to mind pirate perch.

"Fish prey on the adults and offspring of beetles, which all live in the water. For tree frogs it is just eggs and larvae, because the adults live in trees," Resetarits explained.

The researchers tested the response of beetles and frogs to different fish. They placed different species of fish in opaque plastic trashcans that were submerged underwater in artificial, outdoor ponds so that the beetles and frogs could not see them or sense them through disturbances in the water. The makeshift fish cages did contain openings covered with netting, however, so that chemical signals from the fish could leak into the water.

When the tree frogs laid fewer eggs in all of the ponds except for the ones containing pirate perch, Resetarits says he and Binckley were surprised and puzzled. But when aquatic beetles showed the same lack of response to the same fish, the scientists were "flabbergasted."

The pair soon realized that they were witnessing something strange. Pirate perch have voracious appetites and are not picky eaters, so it's not that the prey were never in any danger. For some reason, the beetles and frogs just didn't know the fish were there.

Just how the pirate perch is chemically masking its presence is unclear. "We call it camouflage because that's a very familiar term, but we actually don't know what the mechanism is," Resetarits said.

Knouft, the ichthyologist, called the finding "really novel and interesting," and commended Resetarits and Binckley for "thinking outside of the box" while trying to explain their puzzling results.

"I think scientists are sometimes lulled into viewing animal behavior in the way we perceive things, for example, by talking about camouflage as a mainly visible thing," Knouft said. "But [this new study] points out that chemical camouflage may also be a very important aspect of an organism's life history."

Resetarits said he wants to test how the pirate perch's ability to hide chemically affects its hunting success, and whether the fish might be able to hide from its predators as well as its prey.

The scientists are also planning further studies to determine which chemical signals beetles and frogs use to identify fish - and then see if these cues might be missing in pirate perch.

"It's exciting to see what the next step is going to be when they actually nail down what the mechanism is that the pirate perch are using," Knouft said. "I think the techniques are out there for them to figure that out."

Ker Than is a freelance writer based in Southern California.