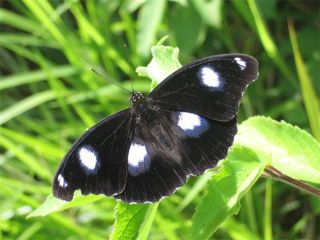 Some moths and butterflies bear circular, high-contrast marks on their wings that have long been thought to scare off predators by mimicking the eyes of the predators' own enemies.

Not so, say Martin Stevens and two colleagues at the University of Cambridge in England, who argue the marks work simply because they are conspicuous. (Predators are wary of prey with striking patterns, as those patterns often warn of toxic substances.)

To test their claim, the team created artificial prey using pieces of gray paper marked with black-on-white spots in various shapes, sizes, and numbers; they attached the paper "wings" to dead mealworms, pinned the worms to trees, and waited.

Two days later, they found that the worms affixed to "moths" with eye-mimicking pairs of spots had been devoured by wild birds in numbers equal to those associated with eye-catching shapes: rectangles, single large spots, and trios of small spots. It was conspicuousness that was doing the trick.

Why, then, do wing marks look so much like eyes? The answer may lie in the process of wing formation. During moth development, molecules that cause wing cells to produce pigment can easily radiate from a central point, resulting in circular designs.

Eye-like marks in the animal kingdom are often called "eyespots." Now, Stevens recommends that the words "wing spots," "tail spots," or "fin spots" be used to designate them instead.

The finding was detailed in the journal Behavioral Ecology.