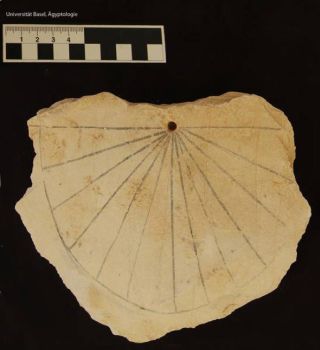 A sundial dating to the 13th century B.C. and considered one of the oldest Egyptian sundials, was discovered in Egypt's Valley of the Kings, the burial place of rulers from Egypt's New Kingdom period (around 1550 B.C. to 1070 B.C.).
(Image: © University of Basel)

A sundial discovered outside a tomb in Egypt's Valley of the Kings may be the world's oldest ancient Egyptian sundials, say scientists.

"The significance of this piece is that it is roughly one thousand years older than what was generally accepted as time when this type of time measuring device was used," said researcher Susanne Bickel, of the University of Basel in Switzerland. Past sundial discoveries date to the Greco-Roman period, which lasted from about 332 B.C. to A.D. 395.

The sundial is made of a flattened piece of limestone, called an ostracon, with a black semicircle divided into 12 sections drawn on top. Small dots in the middle of each of the 12 sections, which are about 15 degrees apart, likely served to give more precise times.

A dent in the center of the ostracon likely marks where a metal or wooden bolt was inserted to cast a shadow and reveal the time of day. [See Images of the Sundial and Egyptian Burials]

"The piece was found with other ostraca (limestone chips) on which small inscriptions, workmen's sketches, and the illustration of a deity were written or painted in black ink," Bickel told LiveScience in an email.

Bickel and her colleagues aren't sure for what purpose the workmen would've used the sundial, though they suggest it may have represented the sun god's journey through the underworld.

"One hypothesis would be to see this measuring device in parallel to the illustrated texts that were inscribed on the walls of the pharaohs' tombs and where the representation of the night and the journey of the sun god through the netherworld is divided into the individual hours of the night," Bickel wrote. "The sundial might have been used to visualize the length of the hours."

The device may have also been used to measure work hours. "I wondered whether it could have served to regulate the workmen's working time, to set the break at a certain time, for example," she said. However, Bickel noted, a half-hour wouldn't mean much to these people.

In the same area, Bickel and her colleagues have made several amazing discoveries, including a tomb with two burials, one from Egypt's 18th dynasty and the other from the 22nd dynasty, which was brought into the tomb some time after the pillaging of the first burial. A wooden coffin linked to the secondary burial contained the mummy of a chantress of Amun called Nehmes-Bastet. The scientists are not sure who would've been buried in the original tomb, though they found remains of a mummy without linen bandages on the floor of the structure. "This badly broken mummy is probably the original first owner of the tomb," write the researchers on their website.

Bickel and her colleagues have been working in the area since 2008 and plan to continue over the next couple of years, she said.