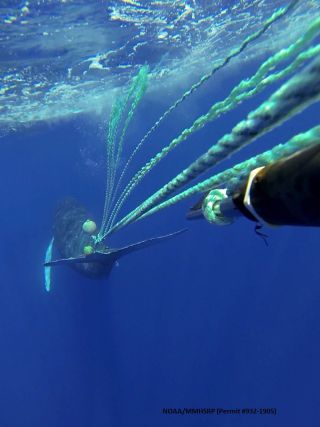 An underwater image of a humpback whale entangled in fishing gear that was rescued by divers on March 11, 2013 in the waters off Maui, part of a marine sanctuary for the whale.
(Image: © HIHWNMS/ NOAA MMHSRP permit # 932-1905)

Specially trained rescuers recently freed a humpback whale swimming off the island of Maui from a tangle of rope, a potentially life-threatening situation for the animal.

A tour vessel and a U.S. Coast Guard aircraft initially spotted the whale on March 8;the animal had small-gauge line cutting into its tail, according to a release from the National Oceanic and Atmospheric Administration's National Marine Sanctuaries. Observers found the whale in the waters of Hawaiian Islands Humpback Whale National Marine Sanctuary, where humpbacks migrate each winter to mate, calve and nurse their young.

A response effort, led by the sanctuary and working under NOAA's Marine Mammal Health and Stranding Response Program, was quickly launched, the release said. The rescuers worked from vessels to cut away 40 feet (12 meters) of trailing line, but couldn't completely free the whale.

However, they attached a satellite-tag buoy to the whale and relocated it between Kaho'olawe and Lana'I on Monday (March 11); there, they were able to remove the rest of the gear tangled around the animal. [Photos of the whale rescue.]

Altogether, rescuers removed more than 200 feet (61 m) of line and two buoys from around the whale. Neither of those two buoys identify where the gear came from, so the source likely won't ever be known, the release said.

So far, only three humpback whales have been found entangled this season, about one-third the typical reports by this point. This effort was the first successful rescue of the season, the release said.

Getting entangled in fishing gear can kill a whale by causing it to drown or starve, by getting caught in its mouth, by exhausting the animal as the creature drags gear behind it, or by causing injuries that lead to infection or blood loss.

Editor's note: This story was updated to correct an error made in the release. Divers were not involved in the effort; rescuers worked only by boat, as being in the water during these operations is unsafe, according to a sanctuary representative.