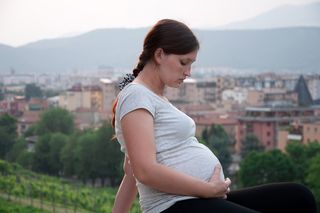 In places where sunlight is scarce, lack of Vitamin D could impact babies' bone growth during pregnancy.
(Image: © Pregnancy photo via Shutterstock)

The study found a high prevalence of vitamin D deficiency among pregnant women in Ireland, which varied seasonally. In particular, babies of women who were pregnant mostly during winter (October though March) were exposed to lower vitamin D levels and had shorter thighbones than those of women who were pregnant mostly during summer (April through September), researchers report in the study, to be published in an upcoming issue of the journal Fertility and Sterility.

Vitamin D is essential for maintaining normal calcium levels and bone growth, and deficiencies can lead to bone-softening disorders like the disease rickets (in childhood) or osteomalacia (in adulthood). While some vitamin D comes from diet, exposure to sunlight is a vital source of the vitamin. Since a developing fetus receives all its vitamin D from its mother, the researchers wanted to compare the vitamin D levels and bone growth of babies who spent more time in the womb during the darker winter months with babies who gestated mostly during summer.

The study included 60 Caucasian mothers and their infants at a hospital in Dublin, located at a latitude that receives little sunlight in winter. Half of the women were at the start of their pregnancies in September or October and gave birth in March or April (the winter group); the other half began their pregnancies in March or April and gave birth in September or October (the summer group). The researchers measured the mother's vitamin D levels about 12 to 16 weeks into pregnancy and again at 28 weeks, as well as fetal vitamin D levels in the umbilical cord blood at birth. The mothers were given ultrasounds and their fetuses' thighbone lengths were measured at 20 weeks and 34 weeks into pregnancy. [Blossoming Body: 8 Odd Changes That Happen During Pregnancy]

"There's good evidence from this study that women who live at higher latitudes have babies that are at risk of vitamin D deficiency," McAuliffe said.

Furthermore, in the winter group, vitamin D deficiency was linked to shorter fetal thighbones 20 and 34 weeks into pregnancy. The findings suggest that reduced exposure to sunlight during pregnancy could have a harmful impact on the bone growth of developing fetuses, confirming the results of previous studies.

McAuliffe recommended that all pregnant women living in areas where sunshine is limited take vitamin D supplements. More research is needed to determine the optimal dose, as well as the potential effects of deficiency on bone growth later in the child's life.