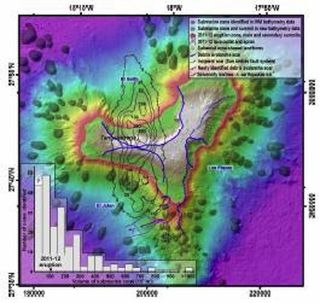 The most recent topography of El Hierro volcano, part of the Canary Islands near Spain.
(Image: © University of Barcelona)

From strange floating rocks to collapsing cones, an underwater eruption near Spain's Canary Islands last year was a rare chance for scientists to watch how volcanic islands are built.

El Hierro volcano spewed "a modest quantity" of lava into the ocean — only enough to fill 120,000 swimming pools, according to a new report. But monitoring the submarine eruption was crucial, because shallow water volcanism can become explosive and endanger human life, said Miquel Canals Artigas, a geologist at the University of Barcelona in Spain.

Between October 2011 and February 2012, Artigas and his colleagues sailed the turbid, ash-filled waters above the erupting El Hierro volcano, scanning its changing shape with sonar to create high-resolution bathymetric maps. Their findings are detailed in the March 2013 issue of the journal Geology.

Birth of a volcano

El Hierro, the youngest of the Canary Islands, lies 290 miles (460 kilometers) west of the coast of Morocco and the Western Sahara. The new eruption occurred just off the island's coast, near the fishing village of La Restinga. The underwater eruption closed fisheries on the island and forced residents to temporarily evacuate.

The cone-shaped underwater volcano was already more than 490 feet (150 meters) tall and growing ever closer to the ocean surface when the ship arrived two weeks after the eruption began on Oct. 10, 2011.

"It was very exciting to be able to follow how the volcanic cone was growing up, from more than 350 meters [1,150 feet] depth [below the ocean's surface] to barely 90 meters [295 feet]," Artigas told OurAmazingPlanet in an email interview. The survey found more than 200 similar cones on the island's underwater flanks. [50 Amazing Volcano Facts]

The cone deflated or collapsed repeatedly during the ongoing eruption, the researchers found. By Nov. 13, 2011, a second cone-style vent opened, but landslides morphed the cones into a fissure eruption, with at least four vents burbling lava by Feb. 24, 2012.

Odd-looking floating rocks, which geologists deem "bombs," appeared in the waters above the volcano. The rocks had a white core filled with air bubbles called vesicles and a dark-colored rim of basanite rock, a different rock type than the core. While balloons of floating lava have been found at underwater eruptions before, these "restingolites" are new and scientists are hotly debating how they formed, Hans-Ulrich Schmincke, a geologist at GEOMAR Helmholtz Centre for Ocean Research in Germany, wrote in an article accompanying the El Hierro research in the journal Geology.

"It is a really modest quantity," said Jesús Rivera, a geologist at the Spanish Institute of Oceanography and lead author of the study. "About 9,000 similar eruptions would be necessary to happen at 125 years intervals in order to construct an island [like] El Hierro," Rivera said in a statement.

The upwelling lava and gas killed off fish and plankton, researchers reported last year. The water heated up by as much as 65 degrees Fahrenheit (18.8 degrees Celsius) and the pH of the water went down by 2.8, meaning it became more acidic.

Though the volcanic activity was declared over on March 6 by officials, a burst of earthquakes in June and September of 2012 raised fears that the gushing lava might reappear.

Earlier this month, scientists with the Volcanological Institute of the Canary Islands (INVOLCAN) said there was a second eruption during the summer 2012 earthquake swarm, UniversoCanario.com reported. Their research ship discovered a submarine eruption and discolored water, possibly from erupted material such as ash, west of El Hierro, the researchers announced. The INVOLCAN scientists plan to present their results at the European Geosciences Union conference in April.