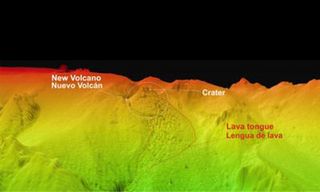 This image was recently taken and shows the new volcano and its lava tongue that descends in the path of the old underwater valley.
(Image: © IEO/MICINN)

It is rare that the birth of an island can be watched by humans in real-time, but that could be what is happening in Spain's Canary Islands.

Residents of La Restinga on the island of El Hierro were recently evacuated after weeks of earthquakes and the growing threat of an erupting underwater volcano that is making its presence known on the surface with an expanding, bubbling patch of dark debris.

The seismic activity off the coast alerted scientists to the fact that something interesting was happening under the sea. To get a better look, a team of researchers from the Spanish Institute of Oceanography (IEO) went out on the water and were able to get a high-resolution picture of the volcano in less than two weeks.

"This is the first time we're able to map [a volcano] so early," said Juan Acosta, principal investigator with IEO who oversaw the mapping. "This is important for understanding the volcanic process in the whole Canary Islands."

The researchers used an advanced sensor system on the IEO's ship, the Ramon Margalef, to perform the mapping of the seabed, a process known as bathymetry. The results, which had a resolution of about 16 to 33 feet (5 to 10 m), according to Acosta, were then compared to a bathymetry from 1998 to see how the volcano had changed the topography of the seabed.

The ship is also equipped with a robotic vessel that has gone closer to the young volcano, taking pictures and video and also measuring water temperature and gases present in the water. The lava is constant for now, and the activity from the volcano is bringing gases and volcanic ash to the surface, staining the water above the new volcano.

Although this is likely the same process that formed El Hierro and the rest of the Canary Islands, it is impossible to say if this eruption will ultimately create a new landmass, or when. Acosta told OurAmazingPlanet it could continue to erupt for a week, a month or a year — no one knows. For now, the cone is still about 650 feet (200 m) away from breaking through the ocean's surface.

Residents in nearby villages are being evacuated for safety due to the constant barrage of small earthquakes and the increasing threat of the volcano. The gases coming from the vent, such as sulfur, are turning the water acidic and small volcanic fragments have been launched into the atmosphere. But researchers are staying as long as they can to collect as much information as possible on the emerging volcano.

"It is spectacular to see how what was once an underwater valley is now a volcanic cone," Acosta said.