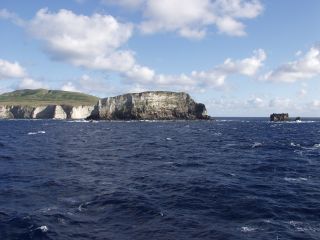 Macauley Island, a caldera formed 6,100 years ago during an eruption at the underwater Macauley volcano.
(Image: © Ian Wright and Colin Wilson)

Like a life-size lava lamp of doom, some underwater volcanoes spit giant lava blobs instead of erupting in explosions, a new study suggests.

Until now, scientists divided volcanic eruptions into two flavors: explosive and effusive. The first is a spectacular, blow-your-top blast that sends ash and rock high into the atmosphere (think of Mount St. Helens). The second is a mellow, gushing lava flow that trundles down a volcano's slopes like hot, red goo (think Hawaii's ongoing eruption).

But after dredging up some unusual pumice (a volcanic rock) from the underwater Macauley volcano in the southwest Pacific, researchers from Victoria University in Wellington, New Zealand, think there's a third eruption style. They've named it Tangaroan, after their research ship and the Maori god of the sea. The study appears today (Jan. 20) in the journal Nature Geoscience.

Bubbles in the pumice indicate one of Macauley's recent eruptions was neither explosive nor effusive, but somewhere in between. "It was sort of like a lava lamp on speed," said Colin Wilson, a study co-author and professor of volcanology at the Victoria University. [Video: Deepest Undersea Erupting Volcano]

Pumice has holes, which are spaces left behind by gas bubbles escaping hardening lava. On land, the rock forms only in explosive eruptions. The number of holes in a piece of pumice, and the holes' size and shape, give geologists clues to the conditions during an eruption. Scientists thought finding pumice near underwater volcanoes meant the mountains also violently vented their magma.

But when Victoria University graduate student Melissa Rotella and her co-authors took a closer look at bubbles in the Macauley pumice, they found a different story.

The holes in the Macauley pumice are rounded and evenly foamy, with the texture of a well-made mousse or meringue, Wilson said. Along the rock's edge, though, was a rapidly cooled edge, lined on the inside by stretched bubbles. "It was quite astonishing, and started us puzzling how you could get bubbles growing to that abundance without breaking things up," Wilson told OurAmazingPlanet.

Based on the super-bubbly pumice, the researchers propose that the weight of seawater atop an erupting submarine volcano keeps magma from exploding, even if it's gassy. Here's how it works:

As magma rises in the volcano, it forms a buoyant "foam," according to Rotella and her colleagues. Pieces of the foamy lava quietly detach and float to the surface in the form of lava balloons, Wilson said. The balloons have chilled margins, from contact with the seawater, but are still hot lava in the middle. As they rise, gas bubbles inside uniformly expand as seawater pressure lessens.

"They're like some kind of hellish popcorn," Wilson said.

The Macauley volcano's balloons could have been 4 inches (10 centimeters) across, based on fragments in the dredge, Wilson said. The authors also found many reports of larger pumice balloons around the world, such as 3-foot (1 meter) pumice balloons on the seafloor at the extinct West Rotas volcano in the Marianas arc near Japan. And at Terceira Island in the Azores near Spain, 10-foot (3 m) basalt balloons rose to the surface during an eruption that began in 1998, they report.

The researchers don't believe every submarine volcano is the perfect lair for a 1970s super villain, but they do suggest that fellow scientists stop assuming that pumice equals explosion.

"The presence of widespread deposits of pumice on underwater volcanoes does not necessarily indicate large-scale explosive volcanism," said Ian Wright, a co-author and professor at the National Oceanography Centre in Southampton, United Kingdom.

The ocean floor of the Kermadec arc, home to Macauley and many active volcanoes, is littered with pumice, which is why volcanologists are so interested in the risk of eruptions there. The Kermadec arc is upwind of trans-Pacific flight routes, and near shipping routes and undersea cables. [The World's Five Most Active Volcanoes ]

Once at the ocean surface, pumice of any kind can float for months, until it breaks up, reaches shore or becomes waterlogged and sinks below the waves. Giant floating pumice rafts act as ocean transports for marine life.

"It's important to understand what's going on in these deep-sea eruptions that generate pumice," said Bill Chadwick, a volcanologist at Oregon State University who was not involved in the research. "Most of the volcanic output on Earth is underwater, and yet we know so little about it compared to the eruptions on land."

Chadwick praised Rotella and her colleagues for "thinking outside the box" and coming up with a new model to explain the range of densities and textures found in the pumice from Macauley volcano.

"I think our ideas about eruption processes on land — especially the whole continuum between effusive and explosive — really breaks down underwater. I think we really need to not just assume that eruptions underwater behave like they do on land, so I'm kind of excited about this paper," he told OurAmazingPlanet. "I'm not 100 percent sure they're right, but that's the way science works. Someone comes up with an idea, other people see if it can be applied to other sites, and you build a consensus."

Wilson said he suspects that Tangaroan-style eruptions will turn out to be quite common. The big hurdle is doing the detailed detective work on pumice rocks, he said.

"You can't witness these things, not if you want to live," he said.