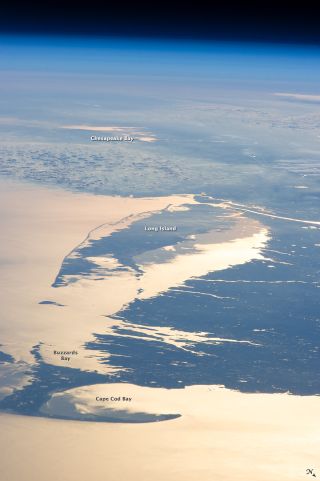 The coast of the northeast United States is silhouetted against the shimmering water of Cape Cod Bay and Long Island Sound in a new photo captured by astronauts on the International Space Station.

The phenomenon of light from a setting sun reflecting off water to create a shining, mirrorlike surface is called sunglint, and is evident throughout the photo.

"The Atlantic Ocean — including Cape Cod Bay and Buzzards Bay, along the coastlines of Massachusetts and Rhode Island — has a burnished, mirrorlike appearance in this image," the NASA's Earth Observatory wrote. "This is due to sunlight reflected off the water surface back towards the astronaut-photographer."

At that time of day, the sun was low on the horizon, as evidenced by the wide extent of the sunglint effect, which reaches all the way from Long Island Sound to the waters of Chesapeake Bay, more than 250 miles (400 kilometers) away. From the vantage of the International Space Station, 260 miles (420 km) above Earth, much of the region is visible, as well as the limb of the planet and its thin atmosphere fading away into the blackness of space.

On the photo's right side, the waters off the Massachusetts coast and in Long Island Sound are especially bright where the peak reflection point is, according to the Earth Observatory.

The photo shows the northeast United States just days after a powerful blizzard blanketed many areas in heavy snow on Feb. 9.

"There is little in this image to indicate that the region was still recovering from a major winter storm that dropped almost one meter (three feet) of snow over much of the northeastern USA less than a week earlier," the Earth Observatory wrote.