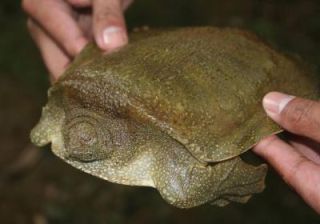 A bizarre soft-shell turtle, Pelochelys cantorii, is just one of more than 150 species of amphibians and reptiles that lives on the Philippine island of Luzon.
(Image: © Rafe M. Brown)

A misty mountain range on the Philippine island of Luzon boasts more than 100 species of reptiles and amphibians, according to a new catalog of the region's species.

On the entire island, more than 150 reptile and amphibian species exist.

The catalog, published Wednesday (Feb. 7) in the journal ZooKeys, is the first for the remote region, known as the Sierra Madre Mountains, which lies on the Northeastern portion of the island. The study reveals that the region may be a hidden hotspot for biodiversity.

The study combined data from several extensive surveys done over the past years, as well as an exhaustive search of all historical museum records.

Most of the species are native to the island, and a full 38 percent of them can't be categorized taxonomically, the researchers wrote in the paper. That suggests at least some may be completely new species.

Protecting those species "remains an on-going effort, challenged by rapid development, large-scale extractive logging and mining industries and conversion of natural habitats into agricultural lands driven by a burgeoning human population," the researchers write in their paper.

In addition, some of the areas that have been least studied lie next to populated areas, so cataloging species diversity there should be a top priority, the researchers write.