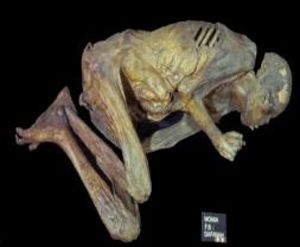 Two Mexican mummies had ulcers when they were alive.

Remnants of the bacterium Helicobacter pylori were discovered in gastric tissue from the mummies, human remains believed to predate Columbus' discovery of the New World.

"It is only through the use of the stomach tissue of these incredible mummies that we were able to make this discovery," said researcher Yolanda Lòpez-Vidal. "Infection is established when the micro-organism infiltrates the stomach lining and induces a local inflammatory response. This is unlike colonization, which does not cause such a response and does not occur in the stomach."

This is the first time that H. pylori infection has been shown to occur in native populations, Lòpez-Vidal said. The research is detailed in BioMed Central's open access journal BMC Microbiology.

"Our results show that H. pylori infections occurred around 1350 A.D. in the area we now know as Mexico," Lòpez-Vidal said. Her research team included colleagues at the National Autonomous University of Mexico.

Mummification, or the preservation of a body in the process of putrefaction, can take place as a result of environmental effects (such as climate or where the body is left) or as a result of human intervention, as in the case of the mummies found in Egyptian pyramids. In Mexico, mummies are found in dry places such as caves and rock shelters, where rapid dehydration occurs. The internal organs are the last to dehydrate, Lòpez-Vidal wrote.

The mummies for this research were recovered in a funeral cave of La Ventana, in the Chihuahua State desert, and in a cave in the state of Durango.

As well as stomach ulcers, H. pylori causes gastritis, duodenitis and cancer. The helix-shaped bacteria is thought to be transmitted by the ingestion of food or water contaminated with fecal matter.

Lòpez-Vidal's team studied the stomach, tongue-soft palate and brains of two naturally mummified corpses — one infant male and one adult male, found in Northern Mexico. The researchers looked for the presence of telltale fragments of H. pylori DNA in the remains after the genetic material was amplified by a common biological technique called polymerase chain reaction.

Although previous research has suggested that H. pylori was present in these communities, this is the first evidence that it caused gastric infections.