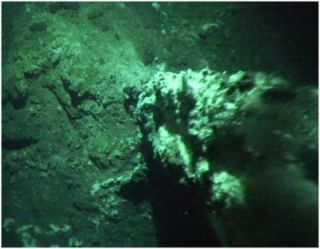 The small relict chimney found on the seafloor near Antarctica at a depth of around 3,900 feet (1,200 meters). Emanating hydrothermal fluid is visible as shimmering water.
(Image: © National Oceanography Centre, Southampton)

A research vessel towing an underwater camera has discovered a volcanic vent in the Southern Ocean north of Antarctica.

This vent differs from "classic" hydrothermal vents by being colder, although higher than surrounding seawater in levels of minerals like lithium, boron and calcium.

Researchers leading the expedition, from England's National Oceanography Centre at Southampton, also found remains of an old "chimney," formed when the water is much hotter, according to a release from the institution. This suggests the vent was once more active and likely supported a variety of strange life, including the kind found near other hydrothermal vents. This time, however, the cameras didn't find any such life at the vent, found at a depth of around 3,900 feet (1,200 meters).

The vent was found by an underwater camera called the SHRIMP and towed by the RRS James Cook in the Bransfield Strait, a little-explored region south of the Shetland Islands and north of the Antarctic Peninsula. Its presence was revealed by a fountain of shimmering water seeping through the seafloor; it shimmers due to its high concentration of minerals and differing salt content from surrounding ocean water.

Hydrothermal vents and underwater volcanoes have been discovered elsewhere in the Southern Ocean, and host a variety of unique life, including many previously unknown species.

The discovery was detailed by a study published recently in the online journal PLOS ONE.