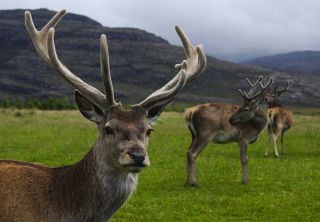 Red deer stag (Cervus elaphus) with velvet antlers in Glen Torridon, Scotland. When the antlers of a deer are still growing they are covered in a special skin called velvet. They lose and re-grow their antlers every year.
(Image: © Wikimedia Commons user Mehmet Karatay)

The carnival huckster of yesteryear, selling snake oil and other strange elixirs, has been replaced by a largely unregulated, multibillion-dollar market in supplements and herbal remedies. And the latest dubious substance making the rounds is also making headlines: deer antler spray.

Baltimore Ravens linebacker Ray Lewis enters the Super Bowl this weekend under a cloud of controversy caused by his association with S.W.A.T.S (Sports With Alternatives to Steroids), a company that markets deer antler spray and other questionable products such as "negatively-charged water," Sports Illustrated reports.

The company's deer antler spray allegedly contains IGF-1, or insulin-like growth factor, a performance-enhancing product banned by the National Football League and other sports organizations, according to Time.com. Lewis denies having used it, although some evidence casts doubt on his assertion.

According to the Baltimore Sun, IGF-1 is approved "to treat a rare form of dwarfism known as Laron syndrome and in other cases where children fail to produce or process growth hormone."

One reason deer antler spray has attracted the attention of professional athletes is because IGF-1 can't be detected in a urine test, according to CNBC.com. Only a blood test will reveal the presence of the hormone. [What If Doping Were Legal?]

From deer to eternity

But what exactly is deer antler spray? Manufacturers claim the product is made from the velvetlike tissue that covers the antlers of male deer, according to the Daily Telegraph. That antler velvet is ground up into a powder and sold either as pills or as a spray that users squirt under their tongues.

The product is widely available from online retailers and other supplement vendors. Because there is little oversight from the Food and Drug Administration or other regulators, however, there is scant assurance that deer antler products actually contain IGF-1 — or, for that matter, any deer antler.

And even if deer antler spray does contain IGF-1, does the spray work? Nobody knows for sure.

A small study of questionable merit (it has never been scientifically reviewed or published in any journal) claims weightlifters who used the supplement for 10 weeks had some measurable strength gains when compared with weightlifters who were given a placebo, CNBC reports.

But other, more credible studies rebut that finding. Researchers of a 2012 report in the New Zealand Medical Journal said, "Claims made for velvet antler supplements do not appear to be based upon rigorous research from human trials, although for osteoarthritis the findings may have some promise."

And a 2013 review from the Journal of Ethnopharmacology found that while deer antler base — a traditional Chinese medicine — may contain some beneficial compounds, "further safety assessments and clinical trials in humans need to be performed before it can be integrated into medicinal practices."

Even marketers have doubts

According to some reports, Lewis may have used deer antler products to recover from a torn triceps. And Leon Popovitz, an orthopedic surgeon at New York Bone & Joint Specialists, told National Geographic that a recent study found IGF-1 supplements could be linked to improving cartilage damage in joints due to repetitive trauma.

But Dr. Roberto Salvatori, an endocrinologist at Johns Hopkins Medicine in Baltimore, told the Sun there is no medically valid way to deliver IGF-1 orally or in a spray. "If there were, a lot of people would be happy that they don't need to get shots anymore," Salvatori said. "It's just simply not possible for it to come from a spray."

Even sellers of deer antler products doubt that the products could deliver IGF-1. "IGF-1 is very unstable," Dean Nieves of Florida-based Bio Lab Naturals told the Baltimore Sun. "It could not exist outside of a very controlled environment." Nieves' company therefore markets the product as a nutritional supplement. "It is just packed with nutrients," he said.