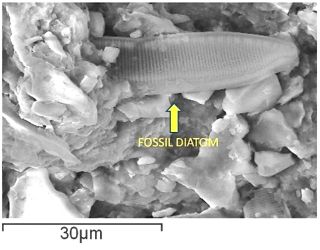 Is this image of a diatom (purportedly found on a meteorite) proof of extraterrestrial life?
(Image: © Screengrab from YouTube.com)

A British professor of astrobiology has asserted in breathless tones that a meteorite found in Sri Lanka contains microscopic biological fossils — indisputable proof, he claims, that life exists beyond Earth. Other scientists, however, have cast doubt on his claim.

Professor Chandra Wickramasinghe, director of the Buckingham Centre for Astrobiology at the University of Buckingham in England, states in an article from the Journal of Cosmology that diatoms — a type of microscopic algae — found in the meteorite are extraterrestrial in origin, the Huffington Post reports.

Wickramasinghe is well-known in astronomical circles for promoting the theory of "panspermia," which proposes that life exists throughout the universe and planets like Earth are "seeded" by comets and meteorites, according to BusinessDayLive.com.

Wickramasinghe claims that because the diatoms are embedded in the meteorite (which he has named Polonnaruwa) they could not be the result of earthly contamination.

"We conclude … that the identification of fossilized diatoms in the Polonnaruwa meteorite is firmly established and unimpeachable," the article states. "Since this meteorite is considered to be an extinct cometary fragment, the idea of microbial life carried within comets and the theory of cometary panspermia is thus vindicated."

Wickramasinghe's latest report, however, has met with considerable skepticism from mainstream astronomers like Phil Plait, who describes Wickramasinghe as a "fringe scientist."

"Wickramasinghe is fervent proponent of [panspermia]. So much so that he attributes everything to life in space," Plait writes in Slate.com. "He's said that the flu comes from space. He's said SARS comes from space. The list goes on and on. Wickramasinghe jumps on everything, with little or no evidence, and says it's from outer space, so I think there's a case to be made for a bias on his part."

This isn't the first time the Journal of Cosmology has been roundly criticized for publishing content lacking scientific merit: "It isn't a real science journal at all, but is the ginned-up website of a small group of crank academics obsessed with the idea … that life originated in outer space and simply rained down on Earth," P.Z. Myers, a biologist at the University of Minnesota, Morris, wrote in 2011 on his popular science blog Pharyngula.

Scientists have also cast doubts on the diatoms' extraterrestrial origins, which appear to be exactly like diatoms found on Earth: "These aren’t evidence of life from space, they’re evidence of life on Earth," Plait writes in Slate.com.

Even the meteorite itself might not be a meteorite: "It isn’t rounded, it looks too friable (crumbly), and the structure is wrong. Carbonaceous chondrites look very much like small stones, more solid, compact, and with an entirely different structure," Plait writes.

"And given that it was embedded with a bunch of identifiable fresh-water diatoms found on Earth, I'm guessing this rock is nothing more than some rock from a river bed or other similar location."

Undeterred, Wickramasinghe maintains his latest study is rock-solid. "If only ideas that are considered orthodox are given support through award of grants or publication opportunities, it is certain that the progress of science will be stifled as it was throughout the Middle Ages," he told the Huffington Post.