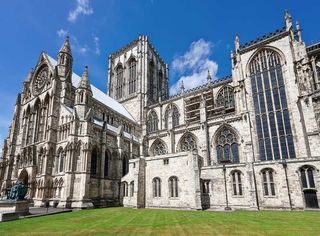 One of the most beautiful and revered cathedrals in Christendom, York Minster in northern England has survived war, looting, fire, pillaging and other threats over the centuries. But the Gothic masterpiece is crumbling due to a relatively recent enemy: acid rain. Preservationists, however, may have found a way to protect it using a common kitchen item.

The limestone used to build the church is vulnerable to acids, and has been under attack since the Industrial Revolution began filling the skies of England with acidic pollution, according to Gizmag.com. The result is acid rain that can wreak havoc on earthly structures.

And despite their best efforts, preservationists have found no protective coating that could keep the towering spires of York Minster safe, until they hit upon a novel treatment: olive oil.

The extract contains oleic acid, a compound that can bind with the stone and protect it, according to Dr. Karen Wilson of the Cardiff School of Chemistry at Cardiff University in Wales.

"The nice thing with oleic acid is that [a molecule of] it has one end ... which will selectively react with the stone, and then the other end, which is a very long hydrocarbon chain, will give you the hydrophobic properties to repel the water," Wilson told NPR.

By combining the olive oil with a Teflon-like material, researchers hope to protect the porous limestone from acid rain, while also allowing the stone to breathe, according to Gizmag.com. (Acid rain forms from both natural sources, such as volcanoes and decomposing plants, and man-made sources, mainly the sulfur dioxide and nitrogen oxides from fossil fuel combustion.)

A trial is now underway using a limestone sample to determine the long-term effects of the treatment.

Olive oil has a long and storied association with human civilization. Originally used to prepare and preserve food, it has also been revealed as an ingredient in ancient medicines.

Some people even use olive oil as a shaving lubricant, to remove paint from hair and skin, as furniture polish, to free stuck zippers and as an additive in cat food to prevent hairballs, according to Curbly.com.

Some experts have also speculated that an olive oil formulation containing testosterone might have allowed Lance Armstrong to give the slip to drug testers trying to determine if the cycling champion was doping with performance-enhancing drugs.