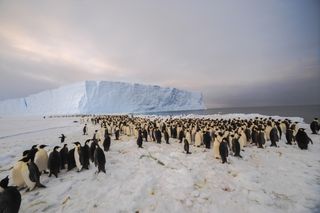 The existence of a 9,000-strong colony of emperor penguins in East Antarctica has been confirmed by three people who visited it for the first time.

Signs of the penguins were spotted by satellite, which took images of large stains on the snow in 2009 that scientists suspected were penguin feces. But it wasn't until early December 2012 that three people from Belgium's Princess Elisabeth Antarctica polar research station visited the colony to glimpse the penguins for themselves, according to a statement from the International Polar Foundation, which runs the station.

The explorers decided not to chance a trip to the suspected colony earlier due to bad weather. But in early December the weather let up, and they arrived at the colony in the dead of night.

"It was almost midnight when we succeeded in finding a way down to the ice through crevasses and approached the first of five groups of more than a thousand individuals, three quarters of which were chicks," said Hubert in the statement. "This was [an] unforgettable moment!"

The trio was part of a team supporting scientific research on the Derwael Ice Rise, about 30 miles (50 kilometers) from the colony. Here, researchers are looking to see how quickly ice from the East Antarctic Ice Sheet is being lost to the sea due to warming-fueled melt.

Scientists estimate the population of emperor penguins of Antarctica is larger than once thought; satellite imagery has helped to find previously unknown colonies like this one, by pinpointing stains from penguin feces as well as spotting the penguins themselves.

Nevertheless, the fate of these and other penguins remains uncertain, and penguin numbers are likely to decline if the continent continues to warm. The Antarctic Peninsula, where emperor penguins are plentiful, is one of the fastest-warming places on Earth, with air temperatures rising between 4 and 4.5 degrees Fahrenheit (2.2 and 2.5 degrees Celsius) in the last 50 years.

Emperor penguins are the largest penguin species and stand on average about 45 inches (114 centimeters) tall  and weigh 90 pounds (41 kilograms).