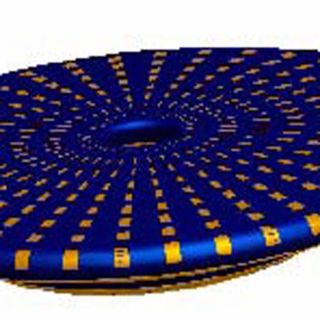 A flying saucer is in the works, but it didn’t come from space. It came from Florida.

Subrata Roy, an engineering professor at the University of Florida, is trying to patent his design of a circular, spinning aircraft he dubs WEAV, short for wingless electromagnetic air vehicle.

The suggested prototype offers several advantages. It can hover and take off vertically. With no moving parts, the WEAV should be markedly reliable. And though his battery-powered model is only six inches across, Roy thinks a larger craft is possible.

Roy applied his experience doing U.S. Air Force-funded plasma research to develop the propulsion system devoid of typical aircraft parts such as propellers and engines. Here is how it works: Electrodes lining the vehicle’s surface ionize the surrounding air. This creates plasma on the vehicle’s exterior. An electrical current sent through this plasma generates a force that not only produces the necessary lift and momentum. It also stabilizes the vehicle in windy conditions.

Looking like a flying bundt pan, the WEAV design is partially hollow and continuously curved. This larger surface area improves lift and control.

Besides providing surveillance on Earth, Roy also envisions the craft in other atmospheres, such as that of Saturn’s moon Titan, where high air density and low gravity would be favorable to saucer flight.

But the path from concept to production may not be smooth. Flying in Earth’s air requires a thrust at least 10 times greater than in outer space where drag and gravity are lower. And the plasma necessary to fly also obstructs wave transmission used for communicating with a remote source.

This doesn’t discourage Roy. “Of course the risk is huge, but so is the payoff,” he said. “If successful, we will have an aircraft, a saucer and a helicopter all in one embodiment.”