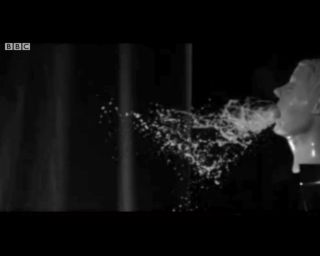 Norovirus, the infectious stomach bug that causes severe nausea and diarrhea — and is the scourge of cruise-ship passengers everywhere — is a very tricky virus to study.

It can't be grown in a controlled laboratory environment, according to PopSci.com, so a cure for the easily spread disease has eluded medical researchers for decades.

To the rescue comes Vomiting Larry, a robot that simulates one of the more disgusting symptoms of norovirus. With his fine imitation of a college frat boy, Larry is helping his creators at the British Health and Safety Laboratory study the spread of the virus.

During a "projectile episode," as researchers daintily call it, the virus can spread up to 10 feet (3 meters) when an infected person throws up, according to Bill Marler, an attorney and an infectious illness specialist, on his Marler Blog.

Norovirus is one of the most easily transmitted viruses known: Just 20 particles can infect a person, according to PopSci.com, and only the common cold is more often diagnosed.

The speed and ease with which the virus spreads allow infections to race through a population, especially on a cruise ship, in a school or in other relatively small, contained groups. "Norovirus is the Ferrari of the virus world," Ian Goodfellow, professor of virology at Cambridge University in England, told the BBC.

Goodfellow notes that while bleach can kill the virus, ordinary households cleaners like window spray will not. Regular hand-washing is one of the best ways to prevent a norovirus infection.

About 20 million cases are reported in the United States each year, according to the Centers for Disease Control and Prevention. Though most infected people recover within a couple of days, the symptoms can be debilitating: stomach cramping, fever, chills, diarrhea and vomiting.