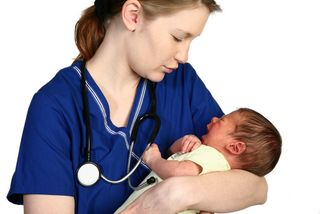 A sharp rise in babies born addicted to painkillers has caught many hospitals unprepared.
(Image: © Shutterstock)

In a phenomenon that reminds some experts of the crack-baby epidemic of the 1980s and 1990s, hospitals across the country are reporting a startling increase in the number of babies born addicted to opioid painkillers like Oxycontin (oxycodone).

In 2009, reports the Wall Street Journal, about 13,000 babies were diagnosed as having painkiller withdrawal symptoms — the condition is sometimes referred to as "neonatal abstinence syndrome." The number of babies born with the condition tripled between 2000 and 2009, found a study published this year in the Journal of the American Medical Association (JAMA).

Another study published last year in JAMA found the number of accidental opioid overdoses in the United States increased from 3,000 in 1999 to 12,000 by 2007.

Babies born addicted to painkillers have a range of symptoms — they continuously cry, vomit and jerk their limbs; many have severe diarrhea and cannot sleep soundly. And because the problem is a relatively new one, most neonatal treatment centers have been caught off guard, so treatment for these newborns is often experimental.

Most of the addicted babies will be treated with some combination of morphine, methadone, anti-seizure medicine such as phenobarbital and clonidine, a drug used to treat withdrawal in adults. Though these treatments may seem harsh, the alternative could be worse: seizures and death, according to the Wall Street Journal.

The long-term effects of neonatal painkiller addiction aren't yet known — a few studies suggest these children might have a higher risk of attention deficit hyperactivity disorder (ADHD), reports the Wall Street Journal. But there may be some hope provided by the fate of babies born years ago and addicted to crack cocaine: Most of those who survived grew up without any evidence of the physical or mental problems that medical experts had feared they might have.

As for combating the problem of opioid abuse, the researchers of the 2011 JAMA study suggest reducing pain medication prescriptions for children and teens and providing training to medical professionals about how to best manage pain.