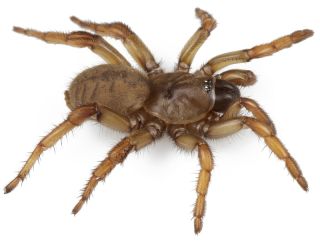 First it was the Obamadon, a newly identified (though extinct) toothy lizard from the Late Cretaceous of North America. And now the 44th U.S. president is getting a living creature named after him, too.

Meet the Barack Obama trapdoor spider, or Aptostichus barackobamai, a species found in California. It's just one of 33 newly identified species in the state among 40 in the Aptostichus genus. Several of the other new-to-science spiders have pop culture-inspired monikers, from A. pennjillettei (for illusionist and comedian Penn Jillette) and A. bonoi (for U2 frontman Bono) to A. sarlacc, named after the fearsome "Star Wars" creature, the Sarlacc, from the fictional desert planet Tatooine.

Spiders in this group are rarely seen because they live in burrows underground. As their name suggests, they build protective trapdoors made from soil, sand and silk, which they hide behind, waiting to pounce on passing prey.

Jason Bond, a trapdoor spider expert and the director of the Auburn University Museum of Natural History, described all 40 species in article published online Dec. 19 in the journal ZooKeys. He expressed amazement at the diversity of environments that these spiders call home, including coastal sand dunes, oak woodland forests and in alpine habitats of the Sierra Nevada mountain range.

"California is known as what is characterized as a biodiversity hotspot," Bond said in a statement. "Although this designation is primarily based on plant diversity, the region is clearly very rich in its animal diversity as well. While it is absolutely remarkable that a large number of species from such a heavily populated area have gone unnoticed, it clearly speaks volumes to how little we know of the biodiversity around us and that many more species on the planet await discovery."