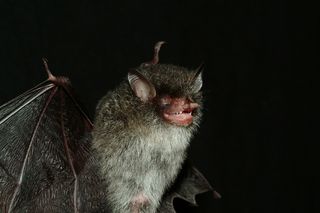 Beelzebub's bat, a walking catfish and a frog that sounds like a bird are among 126 species introduced to science in just a year in the incredibly diverse Greater Mekong region of Southeast Asia, according to a report released this week by the conservation group World Wildlife Fund (WWF).

The walking catfish —  one of the 10 discoveries from 2011 highlighted in the report — doesn't exactly walk. But the fish (Clarias gracilentus) can impressively wiggle across dry land like a snake while using its pectoral fins to push itself upright. The fish, discovered in streams on the Vietnamese island of Phu Quoc, often lives in stagnant waters. When these pools dry up, it can walk away to a wetter home.

Among other fish found in 2011 were a rose-tinted, blind carp (Bangana musaei) that lives in subterranean caves and a miniature fish (Boraras naevus) that's just 0.75 inches (2 centimeters) in length and marked by a large dark spot on its vibrant body, the report says.

"We chose the name Beelzebub to reflect the dark 'diabolic' coloration of the new species and its fierce protective behaviour in the field," Gabor Csorba, of the Hungarian Natural History Museum, said in a statement. The bat is found only in the tropical forests of Vietnam and is among two other tube-nosed bats identified in 2011.

And then there's Quang's tree frog (Gracixalus quangi), whose calls rival those of birds in their complexity, and the rare ruby-eyed green pit viper (Trimeresurus rubeus), which has striking red eyes and a very limited range that includes Vietnam's Cat Tien National Park.

"Very few people in the world have seen this snake," Anita Malhotra, a molecular ecologist at Bangor University, said of the species. "We know very little about what it does."

Conservationists warn that the astonishing biodiversity of the region is under threat because of shrinking habitats. According to the WWF report, 30 percent of the Greater Mekong's forests have disappeared in just four decades. Fish could be especially vulnerable, and the report points to planned construction of the Xayaburi dam in Laos as a major risk.

"The Mekong River supports levels of aquatic biodiversity second only to the Amazon River," Nick Cox, manager of the WWF species program in the region, said in a statement. "The Xayaburi dam would prove an impassable barrier for many fish species, signalling the demise for wildlife already known and as yet undiscovered."

More than 1,700 new species have been described by science in the Greater Mekong since 1997. In 2011, 82 plants, 13 fish, 21 reptiles, five amphibians and five mammals were discovered.